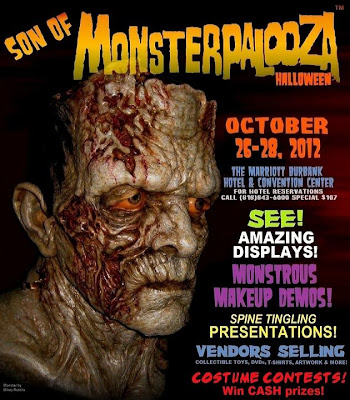 A quick, furtive look around...

If we're lucky, when we're in Los Angeles, there's a chance of catching a movie convention. This time around we lucked into Son of Monsterpalooza, just before Halloween at The Marriott, Burbank. We could only catch the Friday evening, having already booked a hotel out of town for the Saturday and Sunday. But we went along for the vendors and to see if any guests showed up early. 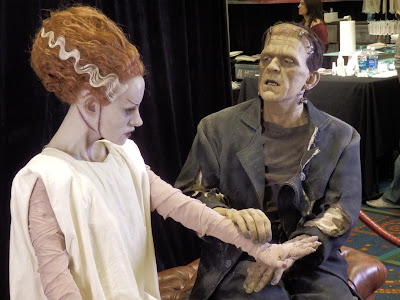 The weekend was built around special effects make-up, with displays of masks and head sculptures on almost every table. The most impressive display we saw were Mike Hill's sculpts of three characters from Bride of Frankenstein. Eerie full-body likenesses of Colin Clive, Elsa Lanchester and Boris Karloff. About as close as you can get to seeing them in person. 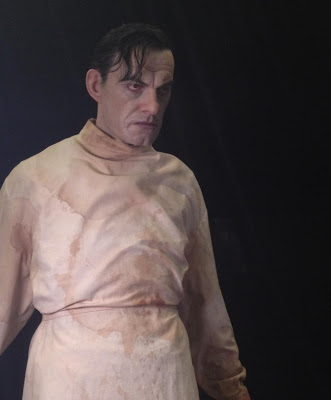 This figure of Colin Clive fascinated me the most. His performances always seem to channel a tortured soul. His aspect here was more menace than despair, but I was very happy that anyone had even bothered to recreate his likeness so carefully. Although the figures were cordoned off, Mike Hill himself said it was okay to get close enough to have my picture taken with the iconic Henry Frankenstein. 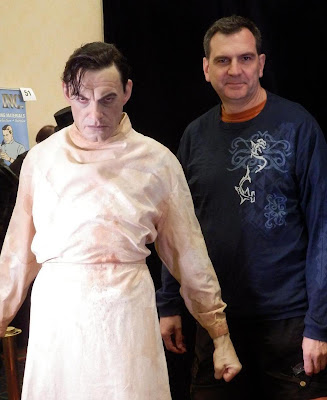 Earlier in the week I'd had a similar experience with a high-quality life-sized photo of Lon Chaney as The Phantom of the Opera. For a second, I felt I'd seen him face to face. A rare advantage of jetlag - delusional time travel.

Even better of course, there were plenty of horror celebrities alive and kicking around the event. I usually turn into a burbling mess talking to the icons I most want to meet, but meet them I must! A young man sitting at a table covered in photographs of Charlie Gemora caught my eye, not to mention his recreation of a mask from I Married a Monster From Outer Space. This was Jason Barnett, who's currently putting together a documentary about Gemora, called Genius Monkeyman. He was kind enough to run through an impromptu biography collecting a few aspects of Charlie Gemora that I knew about (his ape suit and brief appearance as the alien in The War of the Worlds (1953), but so much that I didn't know. His ape work stretching back to classic Laurel And Hardy two-reelers and Marx Brothers' movies, and his other make-up work (like on the robot in The Colossus of New York). The breadth of Gemora's enthusiasm and skills certainly deserve an extended look.


With him was Diane Gemora, who was actually there helping her dad to drastically reshape the Martian costume overnight for it's appearance in the ruined farmhouse, way back in 1953. That costume then inspired the look of E.T. - The Extra Terrestrial, because the scene had frightened the young Steven Spielberg. It was an honour to meet her and I wish them both luck with this exciting project. Diane and Jason's researches have a Facebook page here.


There were a row of actors from George Romero's original zombie trilogy. I chatted again to John Amplas (Martin, Dawn of the Dead, Day of the Dead, Creepshow) who I'd previously met at Horrorhound, Pittsburgh in 2008. Along from him was Howard Sherman, who played my favourite zombie character, Bub, from Day of the Dead. Sherman is still busy, mainly in voicework (like Invader Zim and Batman Beyond). Both cult TV series, but his spread of photos was all about the zombie. He even recited some Shakespeare in Bub's voice. I could listen to him do that all day. Stupidly, I didn't get my photo with him, but of course got an autograph. 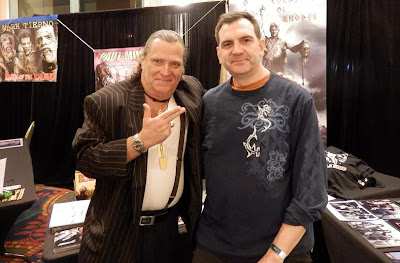 Next was Captain Rhodes also from Day of the Dead, Joe Pilato, who was just as chatty.

Lisa Marie had been in Ed Wood, Sleepy Hollow and best of all Mars Attacks! as the gliding Martian lady of the night. Just after getting her autograph, out of the blue, Dick Van Dyke appeared and wanted a photo with her. Seems Dick was there as a horror fan too! An exciting bonus to see him, at 87, still full of enthusiasm and energy. He starred in some of the earliest children's films I ever saw in the cinema. 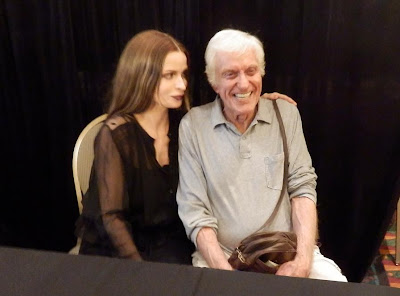 Another unexpected guest then made my entire holiday. The legendary Dick Smith was in attendance and causing a stir. Everyone wanted to meet him! Unsurprising as he's the forerunner of modern make-up effects, perfecting old age make-ups for The Exorcist, The Godfather and Amadeus, as well as providing spectacularly realistic, gory effects for Taxi Driver, The Sentinel and Scanners. This year he'd also received an Honorary Academy Award in recognition of his long career. His was the first name I ever associated with make-up effects nearly forty years ago. I didn't ask for his autograph, but I did get this photo with him. What a warm, friendly guy! 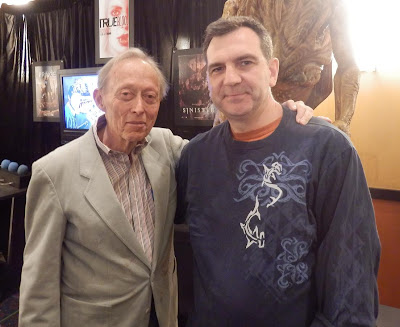 Missing the rest of the weekend meant we didn't get to meet Veronica Cartwright or Lance Henriksen. But it was definitely a superb few hours!


The next Monsterpalooza convention is in April, 2013 - website here.


(All photographs by David Tarrington - thank goodness he was there to take my photograph!)
Posted by Mark Hodgson at 7:22 pm