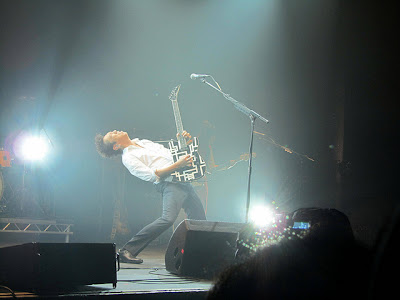 Live in London, living in London!

On December 18th at the Camden Roundhouse, part of the HyperJapan festival, this concert was a superb return to the London stage (after twenty years) for Japanese rock star Hotei Tomoyasu, one of the greatest living guitarists!

For two hours, I could have been listening to a non-stop 1970s electric guitar solo. Tomoyasu played his recent hits ('Bambina') and many tributes to '50s rock 'n' roll, '70s rock heroes (Steppenwolf's 'Born To Be Wild') and his favourite avant-garde British idols like Roxy Music, T Rex and David Bowie (notably 'Starman').

I was delighted to hear his barnstorming opening 'Battles Without Honour or Humanity', which I'm sure many other bands, celebrities and, ah, wrestlers have used as playback intro music. But Tomoyasu plays it live, made world famous by its inclusion in the Kill Bill Vol 1 soundtrack. He followed this up with a blinding arrangement of the Mission Impossible theme.

I'd seen some of his pop promos and two of his film appearances (Samurai Fiction, and Red Shadow), but wasn't expecting his English to be so good. He told the audience (of mostly Japanese Londoners) that he'd now moved from Berlin to live in London. I thought he was just visiting for this gig! So look out for him playing more dates in the UK.

The entire gig was also filmed with five HD cameras, so keep your eyes peeled for something better than iPhone footage in the near future.

Here's a great, longer review of the gig with photos and extracts from HaikuGirl...