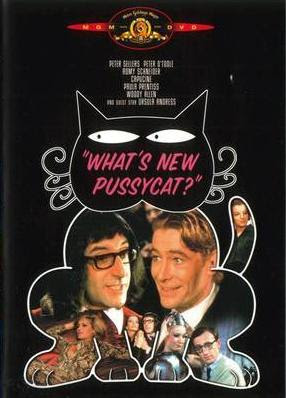 A sex comedy of yesteryear that's such a tame romp it's almost kid-friendly today. No nudity, no swearing, but that doesn't make it any less funny, with a cast put to far better use here than in the similarly mad, but really very expensive Bond-spoof Casino Royale (1967). 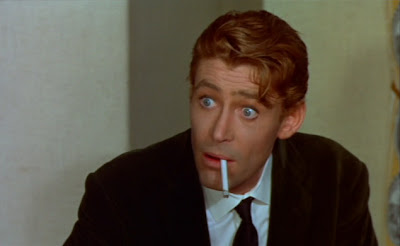 Michael (Peter O'Toole) has a dilemma. Should he give up his lifetime habit of sleeping around with every beautiful woman who gives him a second glance, or should he commit to just one woman, his girlfriend (Romy Schneider)? He can no longer rely on the advice  of friends (like Woody Allen), the problem warrants a trip to a psychologist with some radical methods (Peter Sellers), who himself has fixation for one of his clients (Capucine). Michael then has to resist the temptations of the most beautiful stripper (Paula Prentiss) at his favourite club in Paris, and any other 'pussycat' who happens to drop by (like Ursula Andress)... 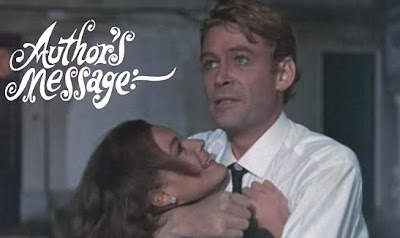 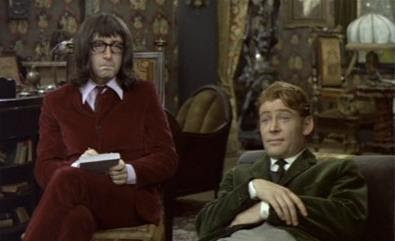 It's portrays a still very recognisable struggle of someone resisting settling down and marrying when they're having so much fun. Also, like many later Woody Allen scripts, despite the central character being a man with a sex habit, there's a range of female characters with a variety of their own sexual appetites. Romy Schneider as Michael's fiancee is also a realistic character who's beautiful, complex and fun.

This is Woody Allen's first movie screenplay and first big screen appearance. His script is at it's best when everyone in the cast sticks to it, less funny when there's madcap improvisation and farcical running around between bedrooms. It's almost a pity that it descends into (French) farce because the dialogue and interplay between all the characters achieve comic brilliance, like an early Clouseau movie written by, well, Woody Allen. 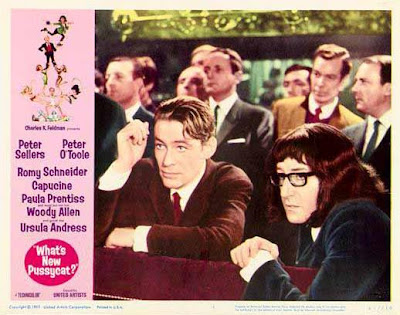 One of the main draws here are the top members of the cast at the top of their game - a rare but effortless comedy turn from Peter O'Toole shortly after Lawrence of Arabia in his most gorgeous decade. Peter Sellers, hot off his second Clouseau film, A Shot In The Dark, as Dr Fritz  Fassbender, the neurotic psychiatrist who hates his wife and kids. 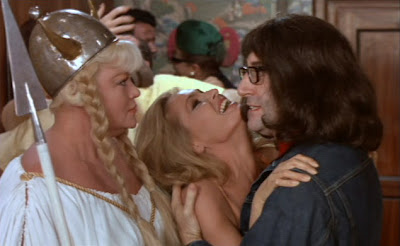 Sellers hones his scenes to pack in every last gag, all while staying firmly in character. Even his hair is funny. While his accent is a typical Austrian psychiatrist, he appears wrapped in a Norwegian flag in one scene. The voice could be a discarded idea from his far more warped German madman, Dr Strangelove. 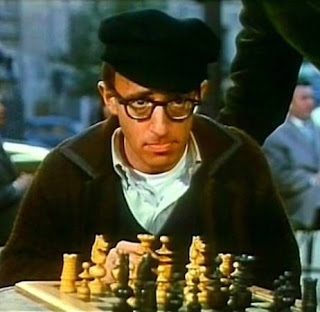 Woody Allen plays the desperate nerd who can't land a woman for himself, very different from his later scripts where he always gets the girl. A big success, this led to a stupidly expensive James Bond spoof in a similar madcap vein. There's even a strangely anticipatory Bond joke, which mirrors a couple of throwaway Pussycat in-jokes that later appear in Casino Royale. Both films had Woody in a scene-stealing supporting role, but only Pussycat has the unique chance for Allen to share scenes with Peter Sellers.


Capucine had previously played Clouseau's long-suffering wife in The Pink Panther and again maintains an icy composure in her scenes with Sellers (which must have been hard). Also inherited from Pink Panther are animated titles by Richard Williams, who eventually brought to life the title character of Who Framed Roger Rabbit?
In bit parts, watch out for a young Daniel Emilfork - he later played the obsessed inventor in Jeunet and Caro's The City of Lost Children (1995), and Howard Vernon, the awful Dr Orloff himself! Also watch out for a lightning cameo from one of the, then, most famous actors on the planet... 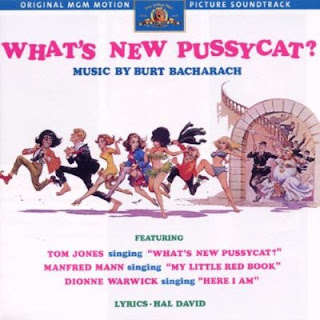 Add to this the catchy Burt Bacharach score, topped with a top ten title song from the powerfully sexy Tom Jones, plus background music from Manfred Mann and Dionne Warwick and the whole film practically epitomises the decade.
Released by MGM in 2004, the current DVD is very disappointing. I don't often notice audio faults, but the mono audio sounded thin, almost tinny in some scenes, with no other audio option. The widescreen anamorphic picture also annoys by cropping off action on all sides - particularly noticeable during the opening credits. Any English subtitles have been removed in order for the DVD to be subtitled in any language, which ruins the "Author's Message" gag (pictured above), an animation obviously added by Richard Williams. No extras either. Grrrr...