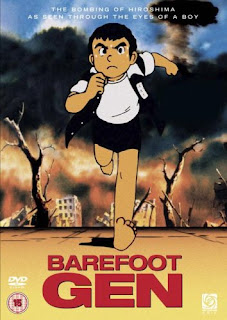 BAREFOOT GEN
(1983, Japan, Hadashi no Gen)
A terrifying account of the atomic bombing of Hiroshima, for children...

Disaster movies are currently all about meteor collisions and climate change. But for decades, the most likely apocalypse was nuclear war. In the 1980s, I was seriously worried it might become a reality, with Ronald Reagan constantly talking tough with the Russians. For all I knew, they all had their fingers on big shiny red buttons ready to launch hundreds of missiles at each other. It was hard to imagine what might happen. 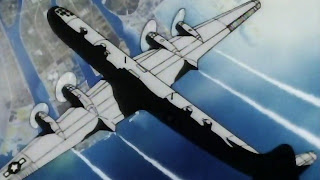 Post-apocalyptic movies portrayed nuclear-ravaged worlds (usually as desert, as in Damnation Alley and Mad Max 2) and sidestepped showing the disaster itself, except for increasingly familiar stock footage of nuclear test explosions. But what was it like to be in a city at ground zero? This wasn't shown - the effects of radiation had only been hinted at with deformed humanoid monsters and giant animal mutations. (The original Godzilla (1954) had carefully portrayed the many effects of a nuclear blast in a work of fiction, but I didn't get to see that until the mid-1990s). 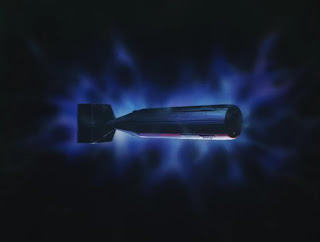 Despite being decried as anti-government propaganda, realistic depictions of what a nuclear war could look like crept onto TV in the 1980s. The first that I saw was a short, shocking clip from Peter Watkins' The War Game (1965) made by the BBC but too realistic to be transmitted for several decades. The BBC however produced and transmitted the dramatic imagining of a nuclear strike on England in Threads (1984), just after America saw The Day After (1983), also made for TV. Both made sobering viewing - any country launching nuclear weapons would also automatically become a target. The fates of the USA and the UK would have been the same. Raymond Briggs' (The Snowman, Fungus The Bogeyman) graphic novel When The Wind Blows was then adapted as an animated film in 1986, describing how a suburban couple might cope with a nearby nuclear explosion if they follow the official government information booklet.
But I still had little idea of what the people in Hiroshima and Nagasaki had actually experienced during and after the nuclear blasts in 1945. The only depiction in a movie I saw in the 90s was a brief scene in Black Rain (Japan, 1989), shown on TV. 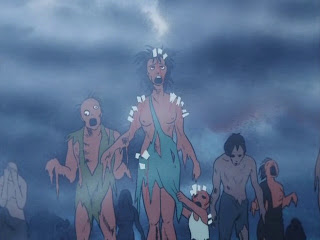 Eventually there was Barefoot Gen. I first saw a clip from the anime movie on Japanorama, a 2002 Jonathan Ross TV show about Japanese pop culture. The moment the bomb detonates over Hiroshima was incredibly shocking. It was simply-drawn animation, but depicted horrendous and graphic events. A nightmare on Earth. It's even more horrifying because the author had personally witnessed it all. To see the film I bought a secondhand VHS from the US, where it had been originally released. 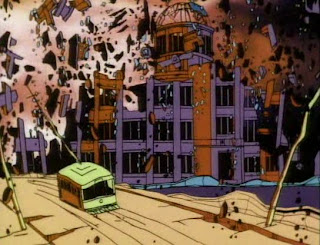 Keiji Nakazawa was six years old when the bomb dropped, as he was on his way to school in the centre of Hiroshima. A split-second quirk of fate saved his life. In an instant, everything around him changed. The city was levelled, there were very few buildings with foundations of steel and stone. Anyone who wasn't instantly vaporised had been hit by the explosive blast and then a firestorm. The survivors could then die from the effects of radiation in the next few minutes, months or years... Keiji stayed on the outskirts of Hiroshima as it started to rebuild itself. 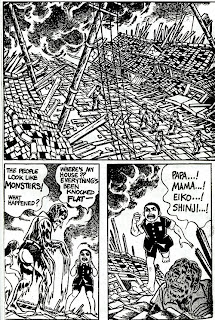 He became a manga writer, but wasn't able to publish the first volume of his most famous work until 1973 when Japan started to talk about Hiroshima and Nagasaki again. The stories of Barefoot Gen are dramatised versions of reality, but were "70 percent" (his words) based on Keiji's actual childhood experiences. Immediately popular, they soon inspired three live-action films at the end of the decade. But the manga proved a better way to spread the story overseas, being translated into many languages. An anime adaption was a logical extension. 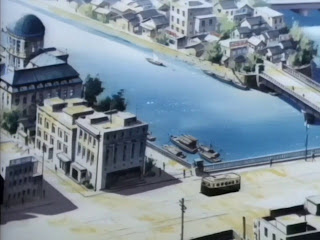 However the animated film (produced by Madhouse) is strangely aimed at children, the title music is fiercely corny and upbeat. It even starts like a Ghibli movie following boisterous six-year old Gen (pronounced with a hard 'g', as in 'begin') and his younger brother trying to scrape fun and food out of the rural war-torn Japanese countryside. Gen's father struggles to feed his family and decries the rulers of Japan for not surrendering. But the boys still have fun together and little mischievous adventures - the children even look like typical Ghibli creations, the youngest child has a huge mouth and a big grin. The animation is fairly simple but well-observed. Occasionally, there's a brief voiceover about the state of the war and the bomb being prepared.


The first half of the movie takes time to set up what life was like around the city in 1945, and then the bomb drops. 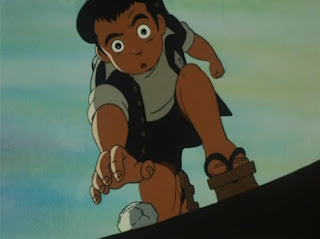 In an instant, 80,000 civilians die instantly. Gen accidentally survives, finding himself in the middle of a nightmare. Some of the walking wounded are partially melted, many of them are better off dead. It looks like hell on Earth. Corpses are everywhere and the rubble is still on fire. 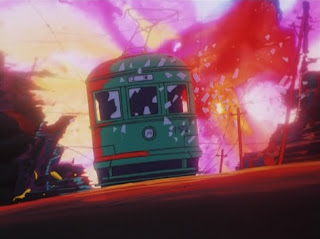 The next scene is just as upsetting as the explosion, as Gen discovers what has happened to his family. 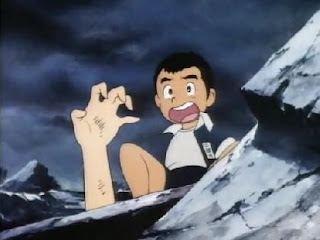 In the days that follow, as Gen is struggling to find food and shelter, people are still slowly and painfully dying of the effects of radiation. (Decades later, that exposure to radiation is still killing the survivors of the bombings of Hiroshima and Nagasaki - Keiji Nakazawa himself is currently battling cancer).
The story continues to follow Gen through the initial dark days after the bomb, until he starts a new life, staying in Hiroshima, making his way anyway he can, with nothing. Against all odds, Keiji wants the story to be an optimistic one. This is where the perspective of a six-year old actually helps, when nothing is impossible and humour can be found in the simplest things in life. 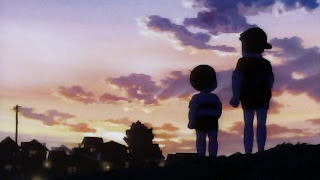 It's an extraordinary film, with a deceptively comic start. I've not seen such an explicit, realistic vision of what it was like on that day. It's horrific, even depicted with simple drawings. I still don't think it's possible for a live-action equivalent of the same sequence. A recent Japanese TV adaption expanded the story to three hours, spending more time with Gen's family, but the scene of the bombing is quite short, treated in a similar way to The Day After.


Gen's story continued in another animated movie set three years later. Barefoot Gen 2 (1986) shows Hiroshima slowly recovering, but with orphans roaming the streets and the black market thriving. It's similar to other post-war stories, but with the characters dealing with the continuing effects of radiation. The doctors are trying to deal with radiation sickness, when no research or treatment yet exists. Understandably, with all the dead still not buried, there's resentment of the occupying American forces.
Again, the story strives for optimism and the chirpy opening title song seems inappropriate, but the story is gritty and memorable, still refusing to pull punches. The sequel is included as a double-bill on the DVDs.


Barefoot Gen prepared me for my own visit to Hiroshima in 2004. A day trip included a visit to the iconic 'atomic dome', one of the only recognisable landmarks left standing close to the centre of the blast. Rubble lies around the skeletal building as if it had been destroyed the day before. A short walk through the memorial park took us to the huge museum which traces the events of how the bomb came to be dropped on Hiroshima and the devastation it caused. There are two huge scale models of the city as it looked before and after the explosion. An exhibit of photographs of the effect of radiation burns was simply too much to look at. 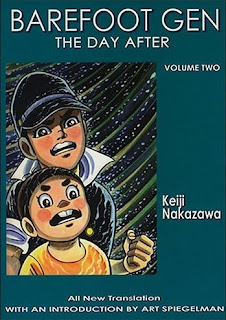 In the anime, as Gen runs to school just before the blast, there's a series of seemingly inconsequential images that resonate with some of the artifacts in the museum. He passes a pile of bottles and a woman sitting on a doorstep. You can see these bottles all fused together from the heat of the blast, as well as the shadow of the woman vaporised into the stonework of the wall she was sitting in front of. The grim events are of course in complete contrast to the vibrant modern city that Hiroshima is again today. My most vivid memory of the day was the tribute of hundreds of fresh flowers still being laid out at the memorial arch. 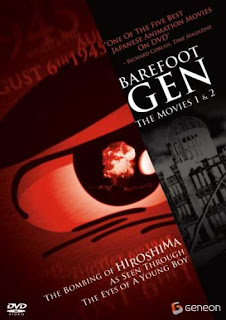 In 2005, Barefoot Gen and the sequel were released in the UK on DVD from Optimum Asia (at top), in Japanese with English subtitles. The 4:3 aspect ratio looks accurate. They're now on DVD in the USA as well, from Geneon (above). Through the efforts of Project Gen, the manga has also been widely translated and published. More about the original manga, and some pages from it, here, with spoilers. 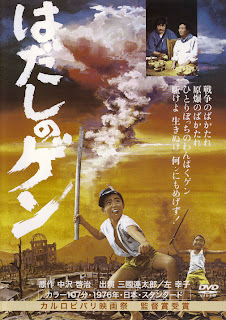 I've not seen the three live-action Japanese films made in the 1970s (directed by Tengo Yamada), but here are some screengrabs from the first film, made in 1976 . 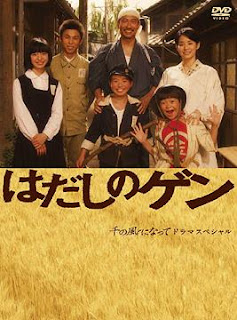 The 2007 two-part TV series expands on the events portrayed in the anime, including more about Gen's older brother joining the army. Only available with English subtitles on this Hong Kong DVD (from Amazon USA here). 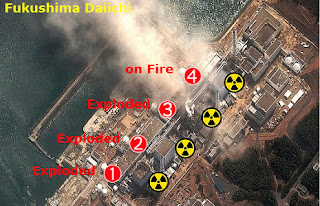 Of course now the Japanese nightmare of deadly invisible radiation is no longer confined to World War 2. The recent earthquake damage to the nuclear power station at Fukushima has again spread radioactivity into the ground, the sea and the air, with little information as to where it is and what the effects can be, short term or long term. It's like a slow-motion replay of the aftermath of Hiroshima.


Keiji Nakazawa is finding a new audience as he attempts to dispel the myths about the effects of radiation. After a lifetime of campaigning against the use of nuclear power and weapons, he's also currently participating in a new documentary. News article and a recent photo of Keiji.
Posted by Mark Hodgson at 7:57 pm