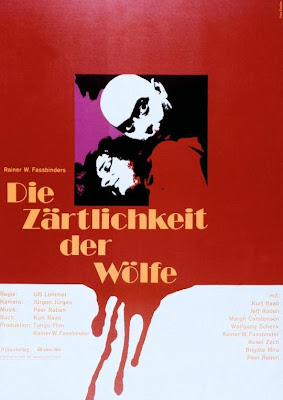 TENDERNESS OF THE WOLVES
(1973, West Germany, Die Zärtlichkeit der Wölfe)
A recreation of the exploits of a German serial killer who attacked young men with vampirism, cannibalism and necrophilia. Watching it again, I've changed my mind about this film. 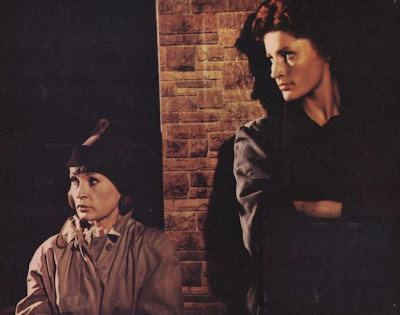 In post-war Germany (the film moves the setting from the end of the First World War, to the end of the Second), two petty crooks find a new way to find meat to sell to their bankrupt neighbours. Fritz Haarmann murders young homeless men, then sells pieces of their bodies to a local cafe. His lover helps dispose of the remains and cashes in the victims' belongings on the black market.

One of Haarmann's neighbours notices that young men go to his flat but are never seen again. But his reputation as a generous do-gooder and his job as a deputised police inspector help hide his crimes from the authorities... 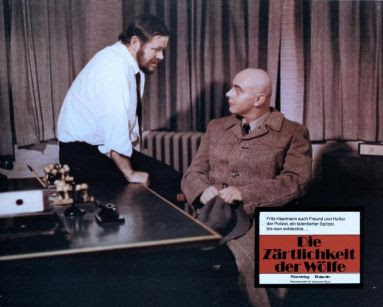 I've always regarded this as a similarly taboo movie as I Spit On Your Grave, Straw Dogs and Last House On The Left. A 1970s' horror that pushed the envelope too far. An experiment in bad taste that history wouldn't repeat. Viewing it again, my knee-jerk reactions started kicking in again, critical that this was a worst-case representation of gay men. A weird-looking outcast who preys on young straight men for sex, sucks their blood, kills them and eats them... but not necessarily in that order. If that's not enough stigma-by-association for you, some of the victims were under-aged.

More objectively, I imagined the film with female victims, and it became more typical of seventies Euro-horror. The extreme elements of the murders are mostly implied and not shown. The most explicit angle of the film is the sexuality of the killer, and by explicit I mean kissing his boyfriend and the nudity of his prey. Compared to other films of the era, there's little difference in pushing the boundaries, besides gender. In Martin, the bloody victims and the nudity are female. Blood On Satan's Claw and To The Devil a Daughter both had full-frontal nudity of young women. 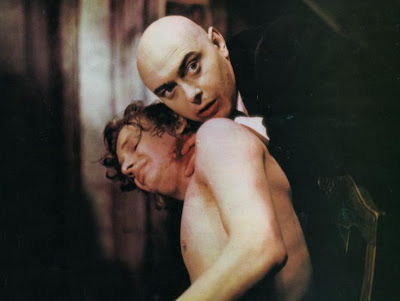 Admittedly many of the naked young men in Tenderness of the Wolves are gratuitous to the plot, once Haarmann's obsessions have been established. This casual and unflattering male nudity is surprising today, as it continues to be rare in horror or any other genre. I think it's this aspect that makes it relatively obscure, excluding it from it's two genres. Horror and gay-themed cinema continue to keep a mutually-exclusive distance.

I'm accepting the film now, but my paranoid defences originally made me back away, writing it off as indefensible back in the 80s when I first saw it. The theme of gay vampirism was too perfect for providing fuel for demonisation in the decade of AIDS hysteria. But Tenderness of the Wolves was made a decade before the AIDS crisis and might even have been considered relevant had it been released a few years later. It unhelpfully mixed the genre of lurid 'true crime' exploitation with the story of a gay love affair going sour. While it's a truthful and sympathetic depiction of a gay relationship, this isn't a great genre for making positive political statements. But what should you expect from director Ulli Lommel, collaborating with producer Rainer Werner Fassbinder (who also appears in the film as a sleazy pimp)? 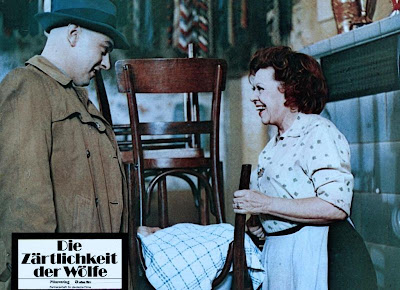 Anyone frightened off by the recent quality of Lommel's films can be assured that this early work is well-produced and dramatically convincing. Though it's less of a narrative than a timeline of case history highlights. Even the detective work, usually the focus of true crime dramas, is sidelined as music replaces their dialogue. The corruption angle is hardly exploited, despite Haarmann working for the police while they're also hunting for him. 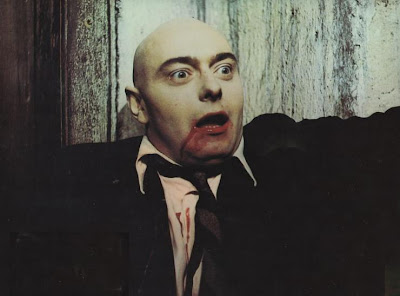 There are homages to Fritz Lang's M in quoted imagery and Haarmann being as completely bald as Peter Lorre's character, even though the real Haarmann had hair. M was also based on a different serial killer - Peter Kürten, the 'Vampire of Düsseldorf', whose most horrific crimes involved very young girls. The two films and their subjects are often confused, the original cases both being from Germany in the 1920s. Fritz Haarmann was known as the 'Butcher of Hanover', and his victims were young men between 13 and 20.

The shaven-headed Kurt Raab gives a relatively restrained performance as the killer (imagine Klaus Kinski in the same role), charming his neighbours and evoking sympathy when his boyfriend leaves him. Raab only lived to be three years older than Haarmann, ironically dying of AIDS-related illnesses. He'd had a full career as a screenwriter and actor, one of his last appearances was in Escape from Sobibor with Rutger Hauer. 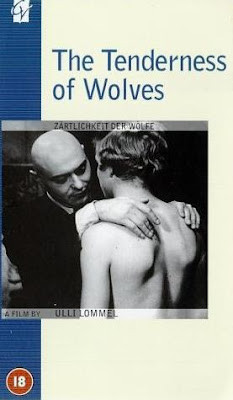 I watched the Connoisseur Video VHS release from the UK (with a slight variation of the English title), which has good subtitles and a 1.66 widescreen aspect. The Anchor Bay release DVD is still available in the US.
Posted by Mark Hodgson at 10:31 am