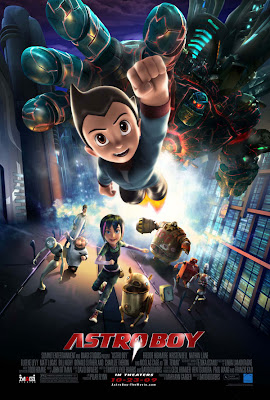 ASTRO BOY
(2009, Hong Kong/USA/Japan co-production)
If only the script had been as good as the animation...

This beloved Japanese manga character became popular in the US when it was one of the first anime series shown on TV, back in the 1960s. Two further series were made in 1980 and 2003 and released in English language versions, but this high-budget feature film attempted to push the character as franchise material, though no sequel is happening. While it was a hit in China, it wasn't in the US... or even Japan. 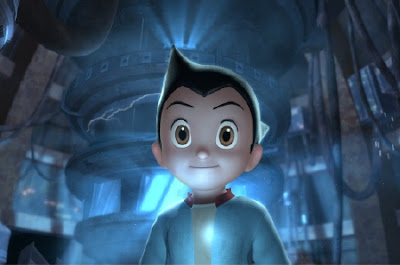 The origin story of Astro hasn't been changed too drastically, retaining the tragic death of Professor Tenma's son, and the scientist's attempt to create a robot to replace him. But not just any robot. Tenma packs the it with enough 'defence systems' to remain safe from any foreseeable harm. But when Astro is activated and begins to realise his potential, the government want to use him as a weapon, or destroy him for being a potential threat.

This is a familiar premise, but clumsily outlined with a wordy, patronising prologue, rather than the elegant introduction of Pixar's recent Wall-E.

The futuristic city where Astro Boy lives was always re-imagined for each new anime series. Here the intricate pastel architecture, the designs of the giant robots and police pursuit vehicles are startling at times. The character animation and motion is dynamic and very high quality, as are the blistering action scenes.

The emotional dilemmas that Astro has to face as he finds a new place in the world are also quite tough for a children's film. The relationship with his father is far from the usual depiction of a single parent, and realistically, touchingly performed by Nicolas Cage. Cora (Kristen Bell), the tough girl he befriends, is rather a stock character, reminding me of Penny Robinson from the Lost In Space remake of 1998, though she's likeable enough.

Bill Nighy doesn't cope with voiceover acting at all well, but thankfully his character isn't in there for long. Donald Sutherland is also put in the shade by Nicolas Cage's vocal performance, as a one-note villain who tells us what he wants near the start and keeps on repeating his dastardly schemes if we'd forgotten.

The main drawback with the film were the secondary 'good' mechanical characters. The robot society in Astro Boy are the crux of the manga - future humanity's relationship with sentient robots. Many of Tezuma's original stories dealt with stories of an integrated automated workforce seriously enough to rival and predate subplots in Spielberg's A.I. (2004). This new Astro Boy includes an arena where robots fight each other to destruction, taken from the stories, echoed in A.I.. 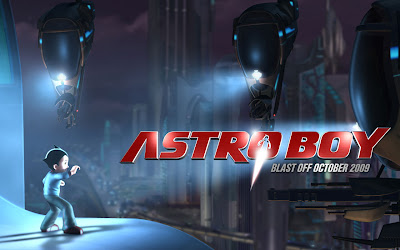 Apart from the snazzy-looking 'evil' ones, the robots aren't dealt with seriously at all, but as comedy relief. One dimensional characters with poorly underwritten gags that reduce many scenes to the level of tiny tot TV. Bizarrely, these comedy reliefs are part of a robot liberation front, a non-important subplot trading on jokes about powerless grass roots political groups. It's the wrong era for satire like this and feeble humour. Without them, this would be a much stronger film for all ages.

This new Astro Boy movie is available in the UK and US on DVD and blu-ray.
Posted by Mark Hodgson at 3:11 pm