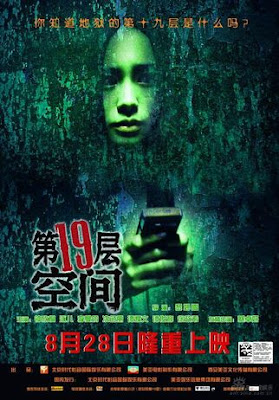 Basically, if you're ever in Macau, don't order the monkey brains...

I buy movies when I hear that they might be good. Then they go into a big pile (well, on a shelf - it's not a good idea to store DVDs in a pile) and then years later I watch it, wondering where the hell I first heard of it. 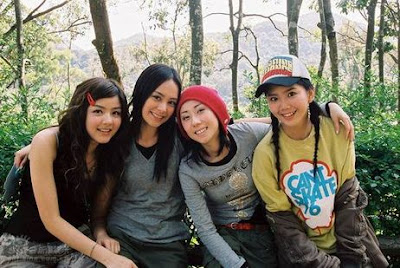 A group of teenage college girls move into an apartment together. One of them is obsessed with her mobile phone and starts hanging around the 'Ghost Tower'. Soon afterwards she seemingly commits suicide, leaving her surviving flatmates in therapy with the creepy, limping Dr Yan, and being snooped by the slightly eccentric Police Inspector Yip. Then another girl starts getting eerie messages on her phone, inviting her to play a game called the 18 Gates of Hell... 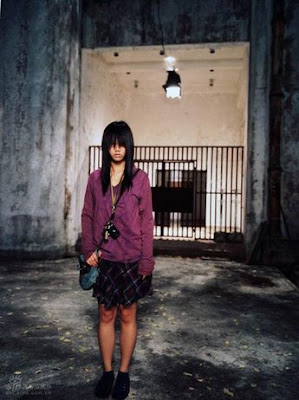 I went into this Hong Kong horror movie with an open mind, thankful that it treated the genre fairly seriously. Though it's fairly late to be making a mystery which involves mobile phones (One Missed Call), serial curses that can be passed on (Grudge), ghostly girls (Ring) and suicides (Whispering Corridors). But with a young cast in a film aimed at a young teen audience, we are apparently already at a point where filmgoers might not realise these are well-worn horror cliches.

One of the clues that this was just for teens were that the cop, the doctor, the artist, the students, everyone was young and good-looking. If it wasn't for the nasty suicide at the start, there'd be barely a need for a restrictive certificate. The obsession with mobile phones was another clue - here the gadget can even lead you safely through Hell if you follow the red flashing arrows! Presented as a video game, it all seemed ridiculously easy.

I stuck with this because of the portrayals of Chinese Hell. The linking of modern technology directly to Hell reminded me of the Japanese series Hell Girl and I've enjoyed the visualisations of oriental Hell in Jigoku and Narok. In Naraka 19, the inspiration seems to be Constantine, where the weather in Hell was also post-apocalyptic. Some of the effects were very CGI, but the imaginative scale and execution was original, if underused. I particularly liked seeing a airborne forest of trees with their exposed root systems floating in the sky, all while it's raining knives! A couple of the levels of Hell were also realised almost completely with large sets rather than electronic effects. Though it's a pity that they missed out showing many of the 18 levels. 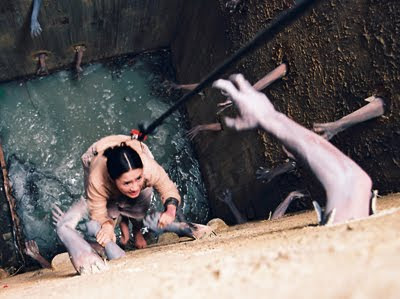 I was distanced from the film by the fast editing and a barrage of video effects to denote that something weird was going on. Holding a camera upside-down is the sort of novelty that should have worn off at the start of the last century. Distracting and hinting at desperation, I'd have preferred the handsome widescreen camerawork (which I think was carefully shot HD video) to do the scaring instead.

A more obvious drawback will be for any fans of Family Guy. Part of the curse depends on a supposedly scary monkey, who even hides in a locker at one point. Besides the parallel with the evil monkey in Chris' cupboard, it's very hard to get a cute little monkey to look scary. The same way horror movies about satanic cats and killer rabbits are a hard sell to animal lovers...

Topped off with some very arbitrary logic about the rules of passing in and out of other dimensions, a similar annoyance to the later Nightmare on Elm Street films - when anything is possible and everything onscreen could be a dream, it's hard to know or care what's happening by the end.

Still, I enjoyed the various trips to Hell, and that Hong Kong is still dabbling in horror. Also interesting that this had a female director, Caroline Lai. 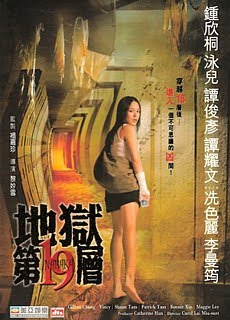 Naraka 19 isn't on DVD in the UK or US. I got this from YesAsia. The Hong Kong DVD (pictured) is a good-looking 2.35 anamorphic widescreen transfer, with unobtrusive removable English subtitles, though a little loosely translated at times. There's also a trailer and a half-hour behind the scenes programme (no subtitles on the extras though).

More frame grabs at Twisted Flicks and another review at Love HK Film.