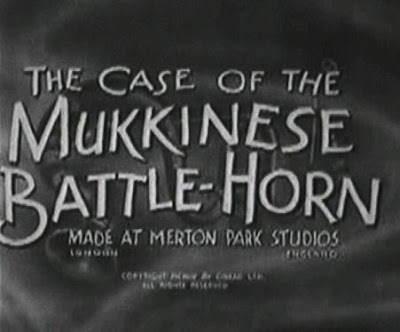 Before Airplane, The Naked Gun, and even Monty Python, were The Goons...

Why is this not on DVD? It's like it disappeared completely. Constantly funny and fantastic, hysterical and historical! The roots of popular surrealist British comedy stems from The Goon Show - a hugely popular radio show that combined the talents of Peter Sellers mad knack for comedy voices and the startlingly inventive scripts of Spike Milligan. While several attempts were made to catch their insanity on film, this short feature is by far the most successful. The Goons had to disband when Peter Sellers movie career took off.

Insane comedy, where the actors often sent up their own movie, dates back to the silent genius of Buster Keaton, through The Marx Brothers movies and Olsen and Johnson's live-action looney toon movie Hellzapoppin'. In Britain, it was The Goons that took surreal and satirical comedy to extremes, inspiring the TV comedy of Monty Python's Flying Circus among many others. Hence Spike Milligan's cameo in Life of Brian, an onscreen tribute. 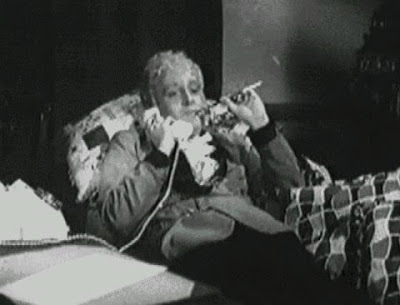 The Case of the Mukkinese Battle-Horn takes The Goons brand of comedy an important step further. Not only does it attempt to visualise a few of their famous radio characters, it adapts effortlessly into film. Fast-paced gags, asides to camera, lampoon, and twists on movie conventions. It's a clear forerunner of the straight-faced send-up of movie cliches, later monopolised by Airplane! and The Naked Gun, some of the most successful comedies ever. It hits a fast gag-a-minute pace that every comedy hopes for. 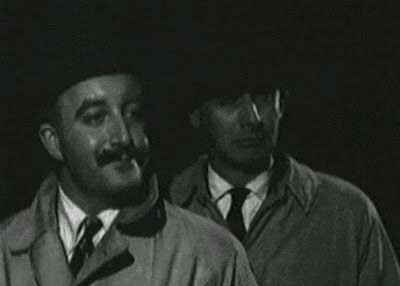 In fogbound London, a priceless but unwieldy antique disappears from a museum. A bumbling detective (Peter Sellers) and his dimwitted assistant (Spike Milligan) eventually investigate ("A robbery? Anything stolen?"). The trail leads to a pawnbrokers shop that has not three but four balls hanging outside ("Business must be good!"). From Scotland Yard to sleazy Soho, which of their suspects would steal this priceless musical monstrosity? 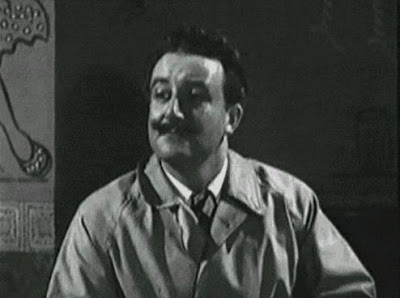 Superintendent Quilt is an obvious forerunner of Peter Sellers' Inspector Clouseau character, who first appeared in The Pink Panther (1963), and then in the even better A Shot In The Dark (1964). The series often featured Sellers' love for heavily disguised characters, buried under wigs, moustaches, humps and hats. These props are also on display in Battle-Horn as Sellers portrays his effete boss Assistant Commissioner Jervis Fruit (in blond wig, above) and the crumbling hunchbacked pawnbroker Henry Crun. While made up as caricatures, his performances aren't overplayed like his co-stars. There's still a sense that these could be real characters, and Sellers is ready for acting them out on the big screen. 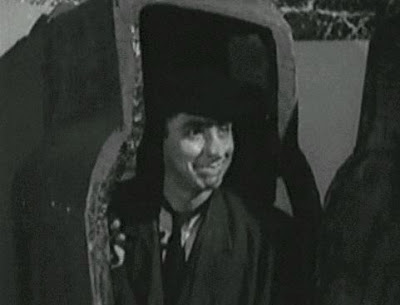 Besides playing his enthusiastic but stupid sidekick, writer and lunatic Spike Milligan successfully visualises his beloved character Eccles, an absolute idiot. His star turn in the film is as an unemployed silent movie actor... 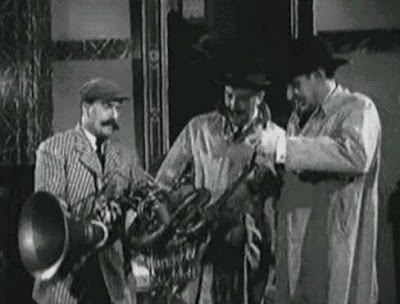 Leading Goon member Harry Secombe is notably missing (the producer suggests that he wanted too much money). But he's ably replaced by multiple-personality TV comedian Dick Emery (above left), a big influence on Harry Enfield's TV sketch shows. Emery effortlessly fits into the madness, and it's a great shame he didn't collaborate further in anything else this mad. Harry Secombe had appeared in the previous Goons movie Down Among The Z-Men but it never impressed me as being nearly as successful or funny, strung out to feature-length - wedging Goons characters into a standard formula Brit-com. Secombe's better remembered as a powerful singer, and his role in Oliver! ("You want moooooore?"). 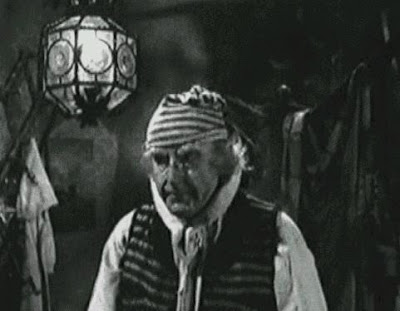 The highlight for me is to see Sellers perform onscreen a regular Goon Show character - the very, very deaf and dusty, senile, doddering Henry Crun. While trying to tempt a cat out of a gramophone using a saucer of milk, he fails to communicate with his equally deaf and senile (offscreen) wife Minnie. 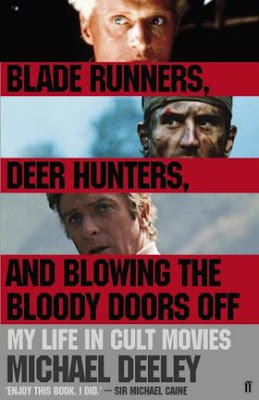 Trivia-wise, this short film also marks Michael Deeley's first production credit. He went on to produce, among others, The Italian Job, The Deer Hunter and Blade Runner, no less. In his amusing, recently published autobiography, he mentions Battle-Horn as the first film he ever produced - an unsuccessful attempt to pilot a Goons TV show to the US.

The entire script is online here.

Apologies for the poor screengrabs, but I haven't found a better way to illustrate this. 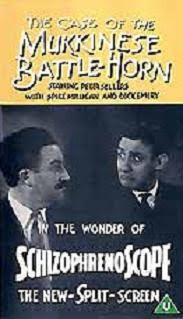 It was a kick to see this in the cinema as a supporting feature when Monty Python and the Holy Grail was first released. Very little else came close to being a suitable second film.

The Case of the Mukkinese Battle-Horn used to appear on TV, but has since disappeared from view, surfacing once on home video on VHS (pictured). I'd hope this gem would be enjoying a better showcase by now. Not a broken one with a brick in it.

The British Film Institute have screened it recently, using a print donated by Michael Deeley. Hopefully they will also restore and release it for wider consumption...