Return from the land of LOST Hunting for filming locations in Hawaii

Just got back, and here's a few of our holiday snaps. But don't panic - nothing of us eating ice cream.

Wherever we go on holiday, we always check if we're going to be near any old movie locations. But making a pilgrimage to places that were once used in favourite films and TV can prove to be a mixed experience. Exciting, disappointing, interesting, revealing, or cheated!

Hawaii is the farthest from home we've ever travelled. But while the island of Oahu is thousands of miles from the USA, it's still only a single flight from L.A., making it a favourite spot for movie shoots, especially if rainforest is needed. The tropical vegetation and volcanic terrain look like a good prehistoric backdrop and was used as such in the 1976 King Kong remake (specifically the scene where they land on the island). More recently, Jurassic Park (1993) was mostly shot on the nearby island of Kauai, but one scene was shot on Oahu.

We took a daytrip to the Kualoa Ranch, on the northeast coast of Oahu, where Sam Neill and the kids narrowly avoid a stampede of Gallimimuses and a hungry T. Rex. The tour guides make a big deal of the log they have to hide behind. You can see a shot of it on their website. The ranch is open for tours on a daily basis, by bus, all-terrain vehicle, quad-bike or horse. The strangely-formed cliffs on both sides of the Ka'a'awa Valley also make this location recognisable in many other films and TV shows. This was also the location used for Hurley's golf course in the first season of Lost. The mountain at the end of the valley was pivotal to the remake of Mighty Joe Young, pretending to be in Africa.

The tour guide told me that it was expensive to shut down the whole ranch and cease all the tours just for filming, but not unknown. For instance, the ranch shut for a day and a half for the shooting of the Gallimimus stampede, and for over a month for Windtalkers. But, whenever the Lost crew come to shoot a scene, the tour buses keep on rolling by! Obviously the islands were used extensively for the many seasons of Hawaii 5-0 and Magnum P.I. centreing on the city of Honolulu, on the south coast of Oahu. The above palace was used as Steve McGarrett's headquarters in Hawaii 5-0. The nearby Punchbowl Cemetary, just north of the city, is where you'll find the statue from the theme tune (see below). We drove past it on the way back from a visit to Pearl Harbor. At the start of the holiday, I kept remembering Deborah Kerr. It felt strange that we visited Pearl Harbor and rolled around in the extremely rough Hawaiian surf, over fifty years after she'd done in From Here To Eternity, but so soon after her passing.

Exploring the North Shore, specifically the northwest side of Oahu, we went looking for the beaches used in Point Break and Lost. Haven't seen Point Break in a while so it was a bit difficult. But our stops at Waimea and Sunset Beach were probably close. We stumbled upon a waterfall supposedly used in Elvis' Blue Hawaii, at the end of Waimea Valley, now a wildlife and botantical garden run by the Audobon Society. 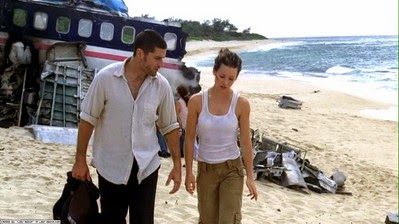 More importantly, we found the beach used for the opening episodes of Lost, the airplane crash site. We looked at several sections of Mokuleai Beach and there aren't many landmarks around to help. But with the aid of this site on About, I think we found it (see photo of me at top). In real life of course, the original cast weren't so very lost... just behind the beach is a road, on the other side of that is an airfield! Further along the coast, on Waleiwa Beach is where Lost continued shooting halfway through season 1. We had a good look along it, but won't be able to match any of our photos up, until we've seen the episodes again.