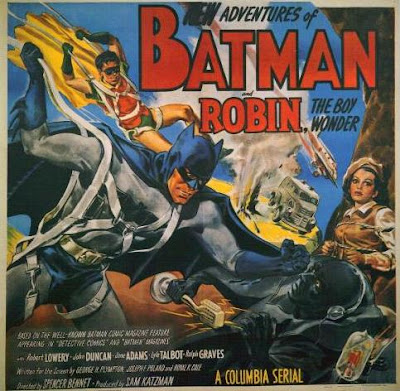 'Cliffhanger' serials were a popular part of cinema programmes for decades. Short, action-heavy films that always ended with the hero about to die. Audiences would then have to wait a week to find out what happened next. Cliffhangers took off when film was still silent, often with a women in the middle of the danger - The Hazards of Helen, The Exploits of Elaine, The Perils of Pauline...

But comic book heroics provided the perfect characters for the greatest cliffhangers of the early sound era with Flash Gordon, Buck Rogers, The Green Hornet, Tarzan, The Phantom all made their onscreen debuts in these serials in the 1930s and 40s. The fast action and slim plots eventually influenced the screen thrills of Raiders of the Lost Ark. Star Wars mimicked the opening 'story so far' exposition from the cliffhanger format, right down to the rolling text used at the start of every Buck Rogers serial (of 1940).

Before the era of the cliffhangers ended, the two earliest movie visions of Batman appeared... 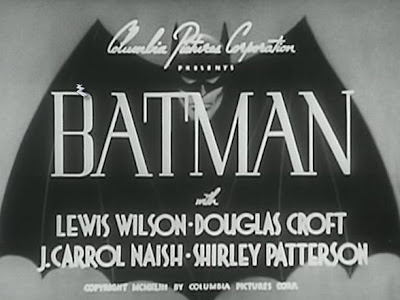 The first onscreen adventure of the caped crusader is blighted by its wartime depiction of the Japanese villains. Dr Dakar (J. Carroll Naish in 'Japanese' make-up) sits in his evil lair over an evil pit of crocodiles (watch out for that hidden trapdoor!), sitting in front of a huge evil statue of Buddha (what?) as if that would make him more hateable. Dakar has also chosen to hide his secret headquarters behind a sideshow ride, showcasing waxwork tableaux of Japanese army atrocities! A choice of 'covers' which has always puzzled me. 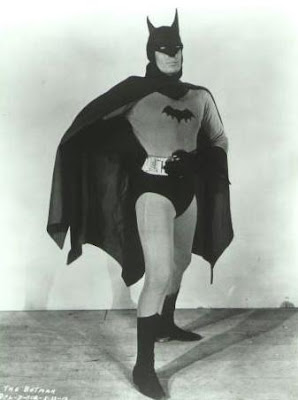 Batman even dishes out the hate-words ("slanty-eyed Jap murderer", that sort of thing) reminding us of the public level of hatred around at the time. Also how easily the enemy in any war is demonised by the media.

If you can stomach all that, you get can see Batman and Robin in action in some fun, fast-paced, furious fistfights, peppered with eye-opening stunts. The baddies have energy guns, a rather nifty car that changes colour, and machines that turn the living into mindless zombies and even re-animate the dead! 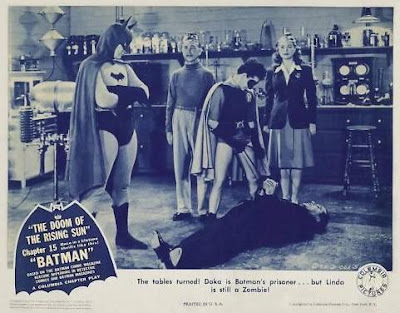 Batman on the other hand is curiously without gadgets. He has, er, his fists! Beating the baddies into submission in a series of punishing brawls. He only has Robin to help him. This Robin is usually the first to be knocked down in every fight. He also has big curly hair and baggy underwear worn, as is traditional, on the outside. With Batman's big, floppy, pointy ears, they don't look sufficiently dynamic as a duo.

There isn't a Batmobile, unless you count Bruce Wayne's sedan, which at least has blinds on the inside so that they can change into their Bat-costumes. The car styles are of the same bulky vintage as the vehicles seen in Batman: The Animated Series (1992). 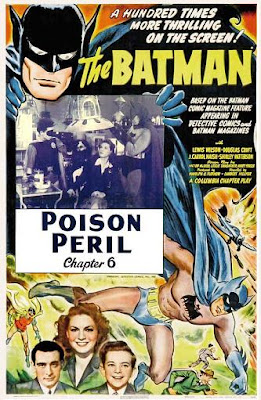 Then there's the smallest Batcave ever - it only has a desk and one chair in it (Robin has to stand). And some rubber bats on strings. Not a good look. Alfred the butler is a fairly useless English clown. Gotham City is near L.A. (it appears on a letter addressed to Bruce Wayne).

Obviously not the best screen Batman ever, but it is the earliest, and a chance to sample a typical cliffhanger serial, with it's cheaty endings, punishing stunts and mad storylines. 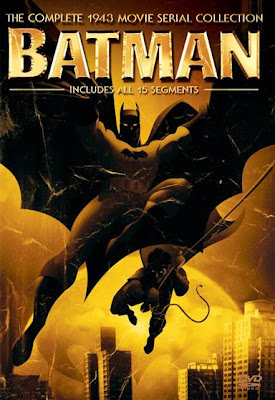 In the past there have been 'politically correct' cut down versions on home video, clearing out the anti-Japanese language. But this currently available 2-DVD set (from Columbia Pictures) has all 15 episodes uncut. It's presented fullscreen 4:3, the way it was shot, and is of course black and white. The quality is fine but the tease at the end of episode 2 is missing a few closing lines. 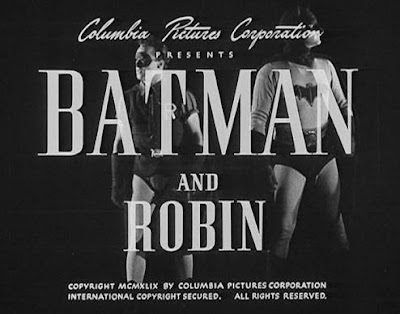 BATMAN AND ROBIN
(1949, USA)
The second Bat-cliffhanger serial looks and feels more modern, tighter, right down to the tights. Only made six years later, this looks like it was made in a different decade. The duo actually look like a dynamic crime-fighting force.

Their bigger Batcave actually has science stuff in it. The baddie is closer to being a super-criminal, right down to a mask and a strenuous dual identity. The Wizard has the power of long-distance remote control! Cars, vans, machines, even people... 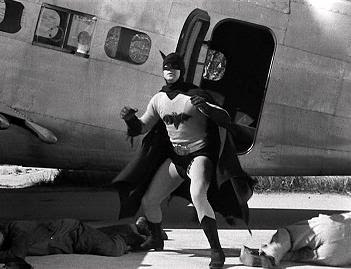 This serial also features the screen debuts of Commissioner Gordon, Vicki Vale, and the Bat-signal. There's less Alfred, less boring Bruce Wayne, and more of the Bat. The desert locations, forever a stamping grounds of westerns and serials are the polar opposite of the gothic or even metropolitan stalking grounds later associated with Bat-stories, but this is still a huge improvement over the first.

We also have this serial to thank for the next screen incarnation of Batman. The story goes that Hugh Hefner was showing this at his mansion to an enthusiastic audience, and a Fox TV executive was inspired to suggest that it would also make a good TV series... Three successful seasons followed, and a feature film, also confusingly called Batman (1966). This classic show, starring Adam West and Burt Ward, was one of the biggest phenomenons in TV history, but has yet to appear on home video in any format... 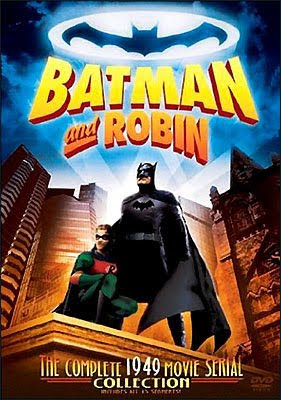 Batman and Robin is available as a complete serial on a 2-DVD set. Again fullscreen and black and white. 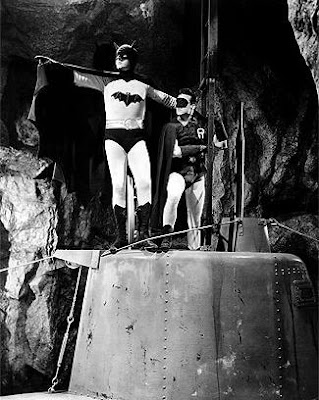 If you like cliffhangers, the must-see is Flash Gordon (1936), the most expensive of the serial genre. It's an adaption of the same comic strip that was used as the story for the tongue-in-cheek 1980 movie.
Further classic serial cliffhangers out on DVD are being reviewed here on the Chapterplays site.

To find out what happens next on this blog, you'll have to come back next week, at this theatre!