DORM - Special Edition DVD - out now but no subs 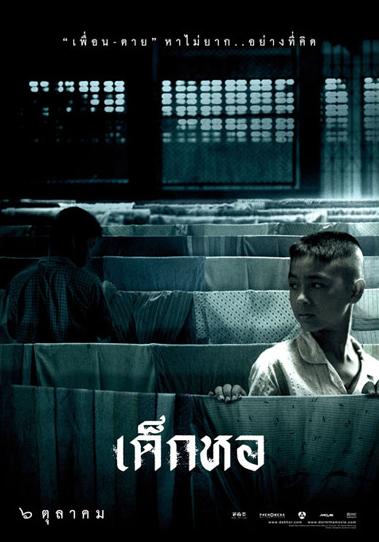 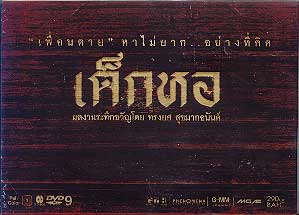 A reasonably-priced deluxe region 3, 2-disc DVD boxset (pictured) has just been released in Thailand. This is my favourite Thai film so far and I've raved about it here . Problem is that there's no English subtitles. Doh! So I'll just tell you what else is in this set - if it does get released in the west, it probably won't have all these extras.

There's a beautifully produced booklet and an extra DVD full of, um, extras. There's a dozen deleted or expanded scenes, a thorough making-of documentary, featurettes on the special FX, photo galleries, trailers, and the original soundtrack (that doesn't appear to have been released on CD). There's also TV coverage of what looks like a cast-and-crew preview with lots of interviews happening while the film clips play in the background - how disrespectful! "Here's my new film, let's talk through it". 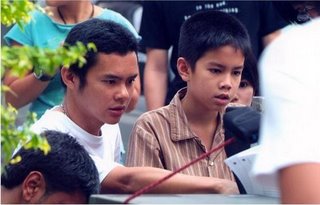 I'd love to hear just how much of the film is based on actual events in writer/director Songyos Sugmakanan's (pictured on the left) own schooldays, but of course everyone's talking in Thai.
Best of the extras is the uncut six-minute pastiche of Mr Vampire. A specially-filmed homage that plays during the schoolboys' 'movie night' scene. It uses lookalike actors and recreates footage of the best gags from Ricky Lau's superb 1985 Hong Kong comedy horror.

Child star Charlie Trairat even has a pop video, though he doesn't seem to be too comfortable singing.

I got mine from eThaiCD.com.

UPDATE APRIL 9th 2007:Dorm is now out region 3 Hong Kong with a no-frills release but with anamorphic widescreen, 5.1 audio and decent English subtitles. It's coming soon for a region 1 USA release at the end of May 2007.