A look through British movie magazines published in 1979. Spread over two posts because it's picture-heavy...
﻿﻿


Revisiting the 1979 Photoplay Annual at the end of last year proved timely because I'd just seen Persistence of Vision, the documentary about how Richard Williams never completed this epic animated film The Thief and the Cobbler. Here he is in 1978 drawing caricatures of Vincent Price for the villain of the story.

This photo of Gene Wilder's Bel Air home in California includes a rare colour look at the portrait of his character's father in Young Frankenstein (1974). Er, I mean, Fronkensteen.

The overdue sequel to The Guns of Navarone starring (pictured below) Harrison Ford, Robert Shaw (Jaws), Edward Fox (The Day of the Jackal) and Carl Weathers (halfway between Rocky and Predator). The bridge in the background is the target of their mission.

By the time ﻿Force 10 From Navarone was released, Robert Shaw had passed away, during the filming of Avalanche Express.

Just when you thought it was safe to go back to the cinema, Jaws returned. Jaws 2 followed Sweeney 2's lead by using a number '2' instead of the stuffy Roman numerals of Damien: Omen II and Exorcist II: The Heretic (and so on).

As you can see, Jaws 2 opened on Boxing Day. A summer movie in the USA that landed for the Christmas holidays in Britain!

By the way, the ghastly half-eaten corpse of the killer whale was a full-sized prop built for the film. I know this because of the book of the making of the film - The Jaws 2 Log.

﻿As a general rule, I like Woody Allen films when he's trying to be funny and Clint Eastwood films when he isn't. I went to see it at the time because it was Clint, but the slapstick biker gang and orang-utan with terrible teeth haven't lured me back for a rewatch, despite Ruth Gordon. 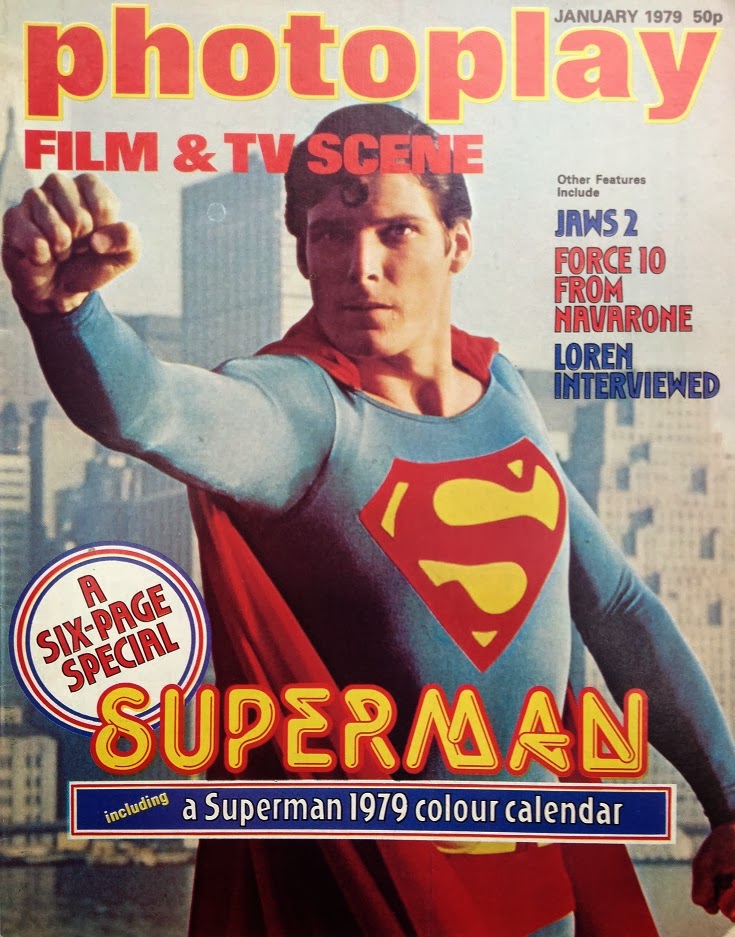 Superman - The Movie landed before Christmas. Most of the newspaper stories focussed on Brando's salary. The publicity pushed the special visual effects developed for the flying sequences. The production team had experimented with some desperate methods to make human flight look realistic, including firing dummies out of a cannon. Wirework and bluescreen to the rescue!
Superman - The Movie proved so successful that it was still playing in West End cinemas six months after it had opened!


﻿﻿
Capricorn One is responsible for boosting the idea that the Moon missions were faked in a movie studio. The conspiracy angle is well portrayed but diluted by comedy and a heap of action. But the climactic helicopter chase scene is remains superbly thrilling.

More about Capricorn One here,

Meanwhile, Britain was in a post-apocalyptic mood - the final Quatermass TV series was made independently (and shown on ITV) because the BBC thought Nigel Kneale's Quatermass script was too downbeat. Here's John Mills on the set of Ringstone Round. Also known as The Quatermass Conclusion. 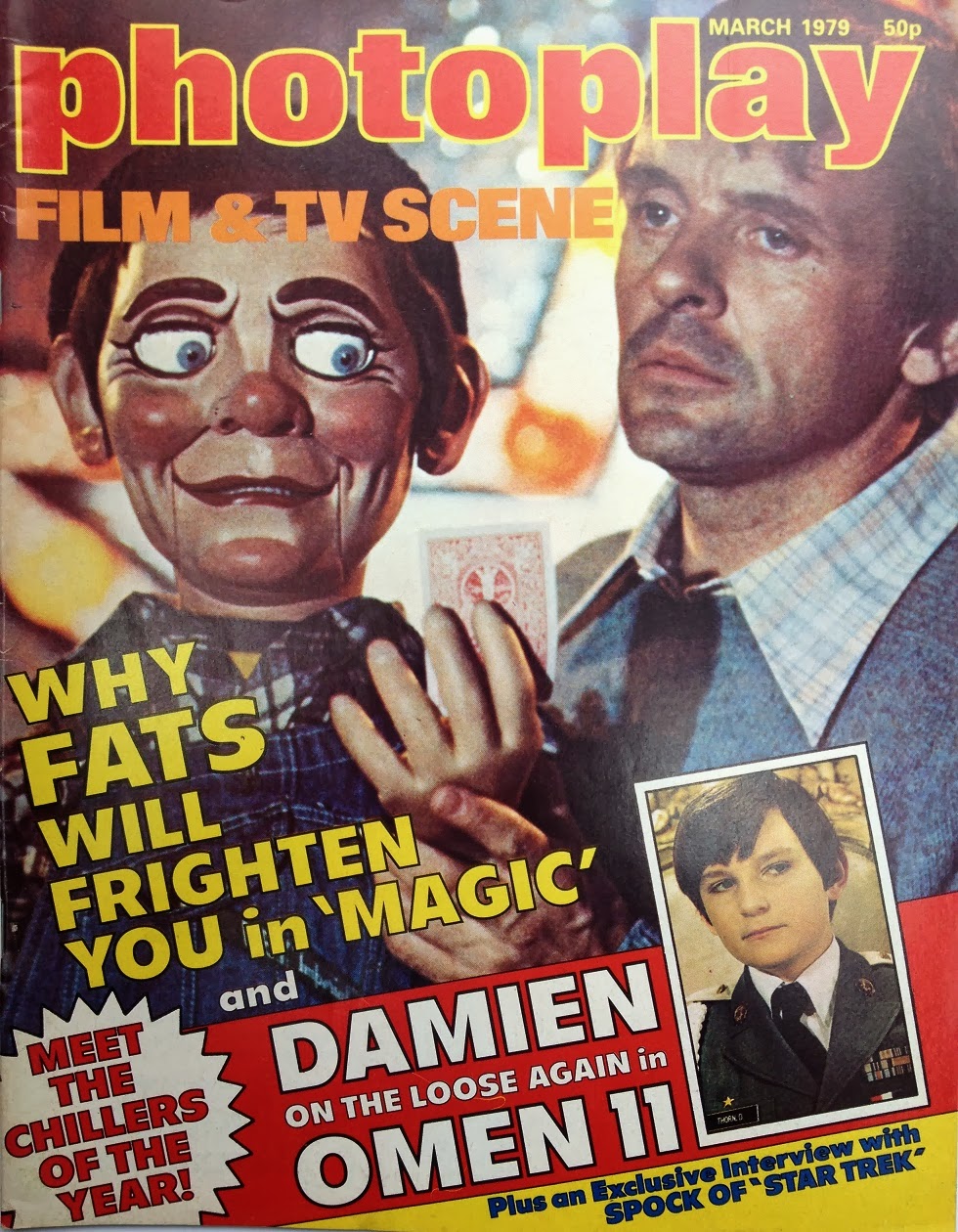 America has always found Anthony Hopkins creepy. His first leading roles in the US were in horror films, long before The Silence of the Lambs - after Audrey Rose (1977) he had a hit with this creepy puppet murder mystery Magic.

Damien: Omen II tracks the son of the Devil heading towards the White House. Anyone who stands in his way mysteriously removed by accidents and crazed animals... Notice above an early memorable role for Lance Henriksen, and the star of Roger Corman's The Tomb of Ligeia (1964), Elizabeth Shepherd (in red), returning to the horror genre as a haunted journalist with an unfortunate roadside manner.

After the success of The Omen, three sequels were announced. But Omen III: The Final Conflict wrapped up the story early.


Another winner based on an imaginative novel by Ira Levin (Rosemary's Baby, The Stepford Wives). The Boys From Brazil played upon then-current fears that many surviving senior Nazis were up to something in South America. Though surely Dr Mengele's ghoulish experience with cloning would surely have been welcomed in a dozen other countries?

Philip Kaufman's (below right) Invasion of the Body Snatchers is more a sequel than a remake of the 1956 original. Kevin McCarthy (below left) even continues his role. Starring Donald Sutherland, Nancy Allen, Veronica Cartwright, Jeff Goldblum and Leonard Nimoy, it's found a new audience with new blu-ray releases in the UK and US. 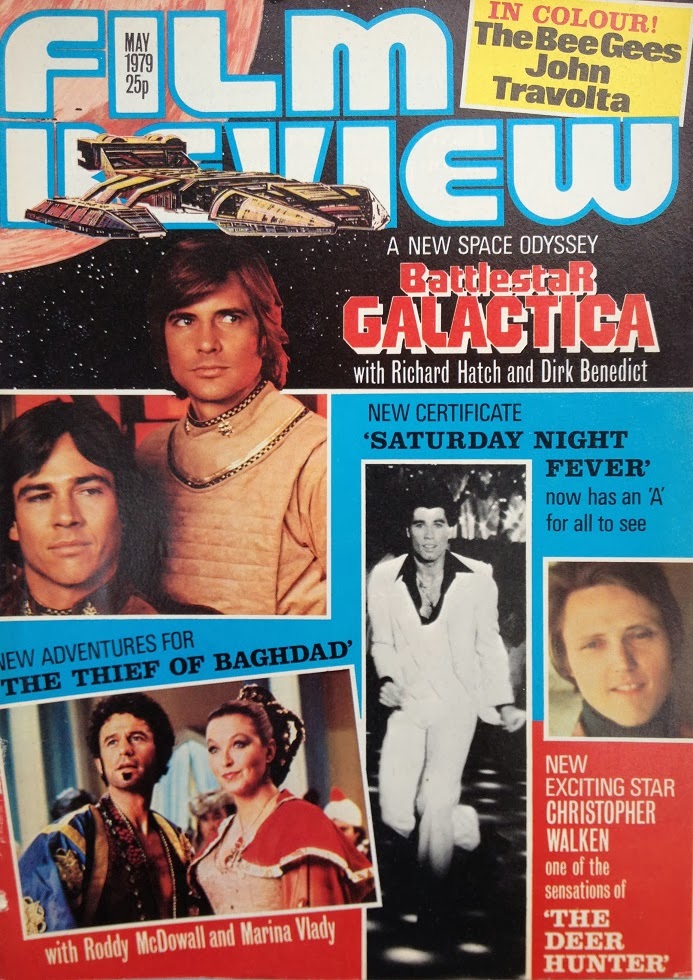 Battlestar Galactica first hit Britain as a movie, edited together from several TV episodes, mainly the first three of the series. The Sensurround rumble track added to the experience. Two more films were released before all the episodes were televised.
﻿

Despite not having a clue who was popular on Saturday Night Live (it was never broadcast in Britain), or what National Lampoon was and barely even knowing what a 'frat house' was, National Lampoon's Animal House was still a hit in Britain, serving as a skewed introduction to American college life.
﻿﻿ 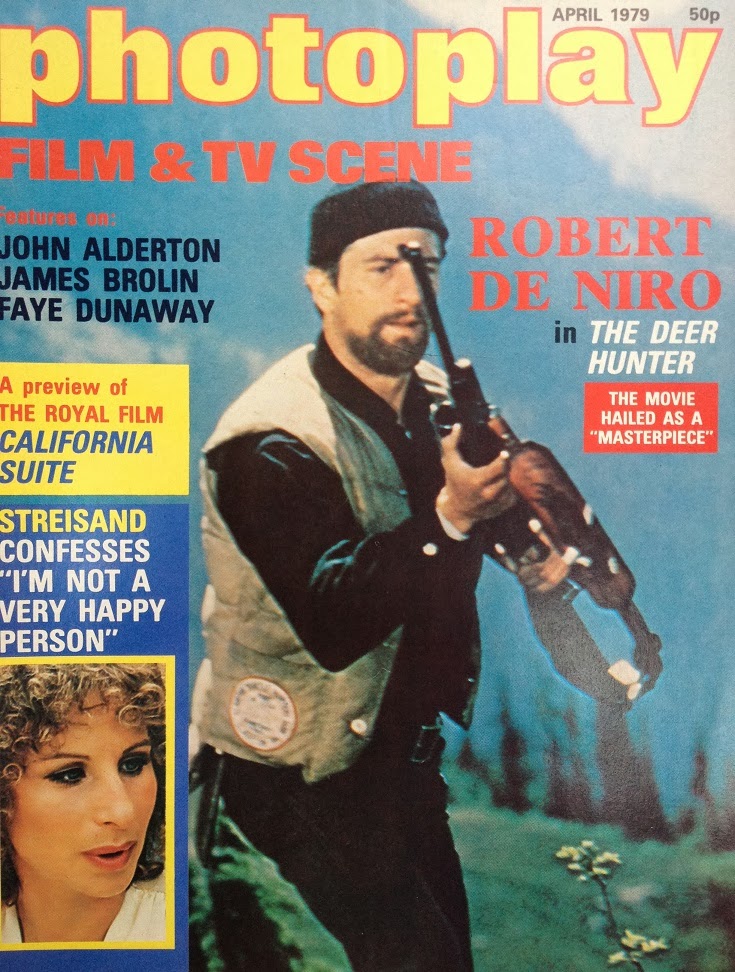 When the war was over, Vietnam war films rapidly became a cliche. But The Deer Hunter and Apocalypse Now were major front-runners.
﻿﻿﻿

These early publicity photos from The Deer Hunter show the main characters in pre-war happiness. The photos that accompanied the reviews were usually from the shattering and controversial scenes of 'Russian roulette'.


This was a huge hit for Robert De Niro and young Christopher Walken (above). The critics also praised John Cazale's performance, but publicity for the actor was more muted because he'd sadly passed away the previous year, The Deer Hunter his final film.


Richard Beckinsale had also died prematurely, just as publicity was beginning for the BBC spin-off movie for Porridge, later released in the summer.


﻿
I'd read about Fantasia but it still hadn't appeared on TV, like many of the major animated Disney films. This re-release was a rare chance to see it in the cinema with its original stereo sound restored.

While Richard Williams was working on his tale of the Arabian Nights, this remake of The Thief of Baghdad arrived just before Arabian Adventure. Notice the completely insane pairing with another Spiderman live-action (TV) movie.

After the success of Animal House, young director John Landis' previous comedy Kentucky Fried Movie had an overdue release in Britain. From the writers of Airplane, this sketch compilation is far less well-known, despite including a disaster movie spoof and the use of famous cameos with actors playing ridiculous situations straight-faced.

﻿﻿
Here's director John Landis performing stunts in his fight with an escaped gorilla - actually a great Rick Baker suit. For their previous film together, John Landis had been made up by Baker as the titular missing link 'Schlock'. Later collaborations included extensive make-up effects in American Werewolf In London, Coming To America and Michael Jackson's Thriller. Baker had returned to low-budget films despite his extensive work on the 1976 King Kong blockbuster, for which he had very little credit. 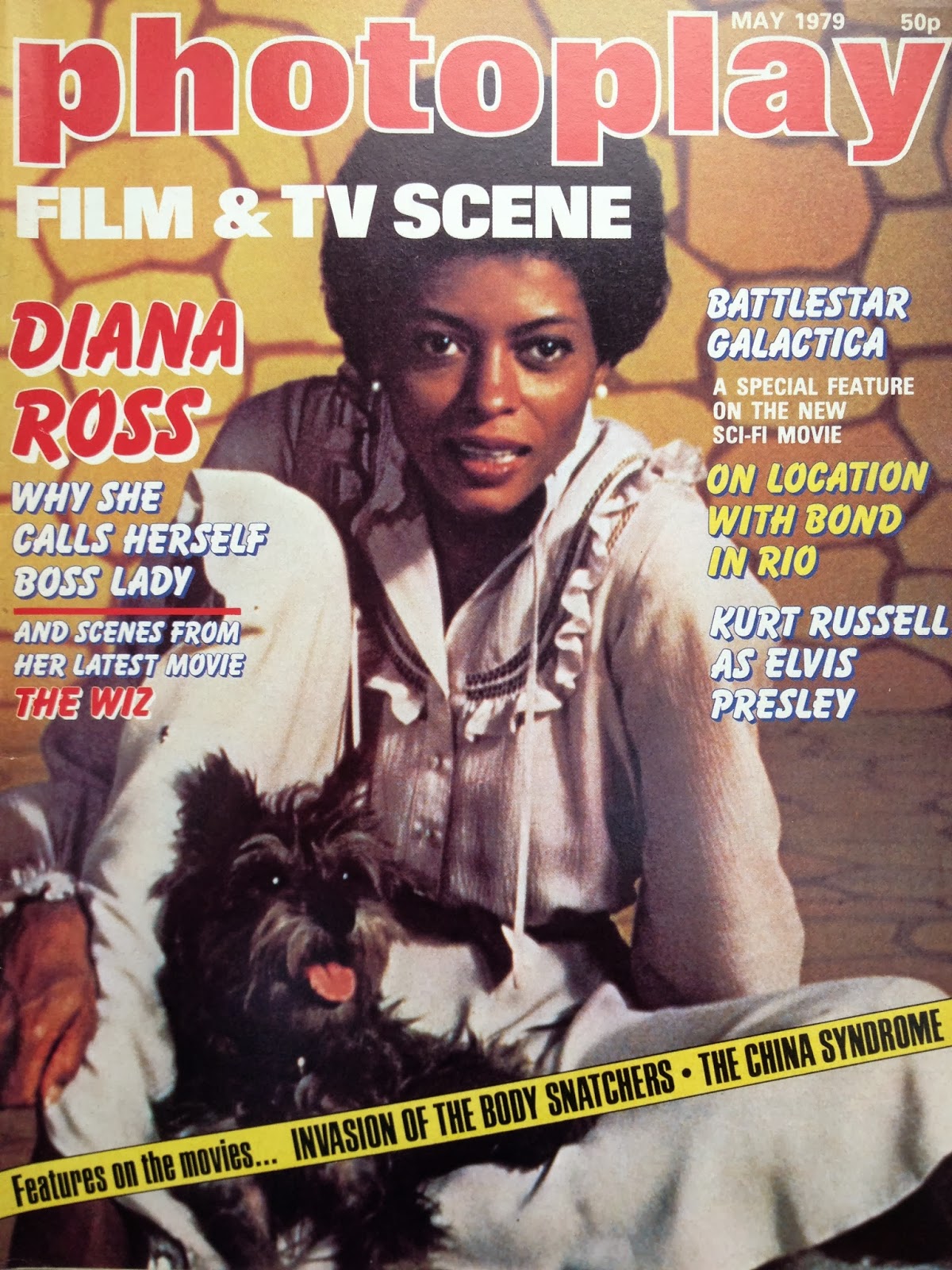 Remake! The Wiz was an expansion of the hit Broadway musical that retold The Wizard of Oz with a black cast. Inventive reimaginings of the characters included early make-up effects from Stan Winston. The production substituted a tweaked version of Manhattan to represent Dorothy's journey to Oz, memorably the Brooklyn Bridge and the climax at the World Trade Centre. I'm not sure how this did in Britain but the double album soundtrack was certainly successful.
﻿
Critics weren't fooled by 33 year-old Diana Ross playing Dorothy, but The Wiz needed star power. Richard Pryor has little more than a cameo and Michael Jackson was a rising pop star rather than a box office name. Note Joel Schumacher in the credits as screenwriter, building on his success with the script for Car Wash.

The title of the article says it all! Here's Kurt Russell portraying Elvis in a American TV movie directed by John Carpenter (this is before Escape From New York). Part of the rush to commemorate The King, who died in 1977. Kurt had been doing TV since his early run as a young star in Disney movies. This also known as Elvis - The Movie! 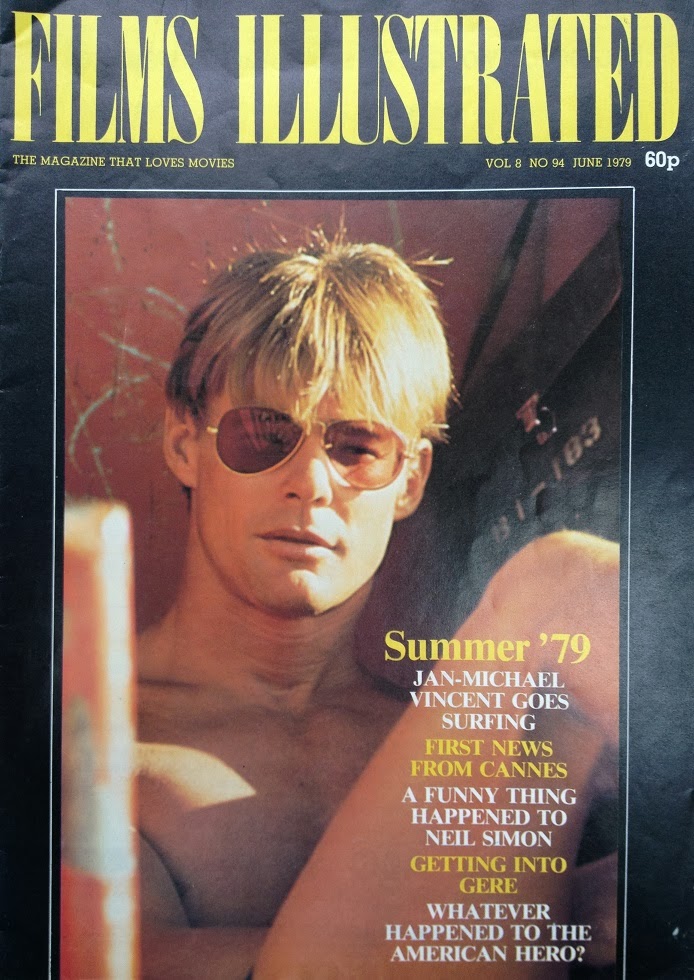 A sultry Jan-Michael Vincent as one of the three surfers up against Big Wednesday, written and directed by John Milius.

After the critical success of Badlands, writer and director Terrence Malick spent a looooong time filming the epic western Days of Heaven. The exterior cinematography was mainly filmed during the 'magic hour' and the script was written during the shoot. The press savaged it because of the runaway budget and here it is opening at only one, smaller West End screen. Malick's continued attention to detail and refusal to rush into projects has encouraged his past work to be reappraised and celebrated. 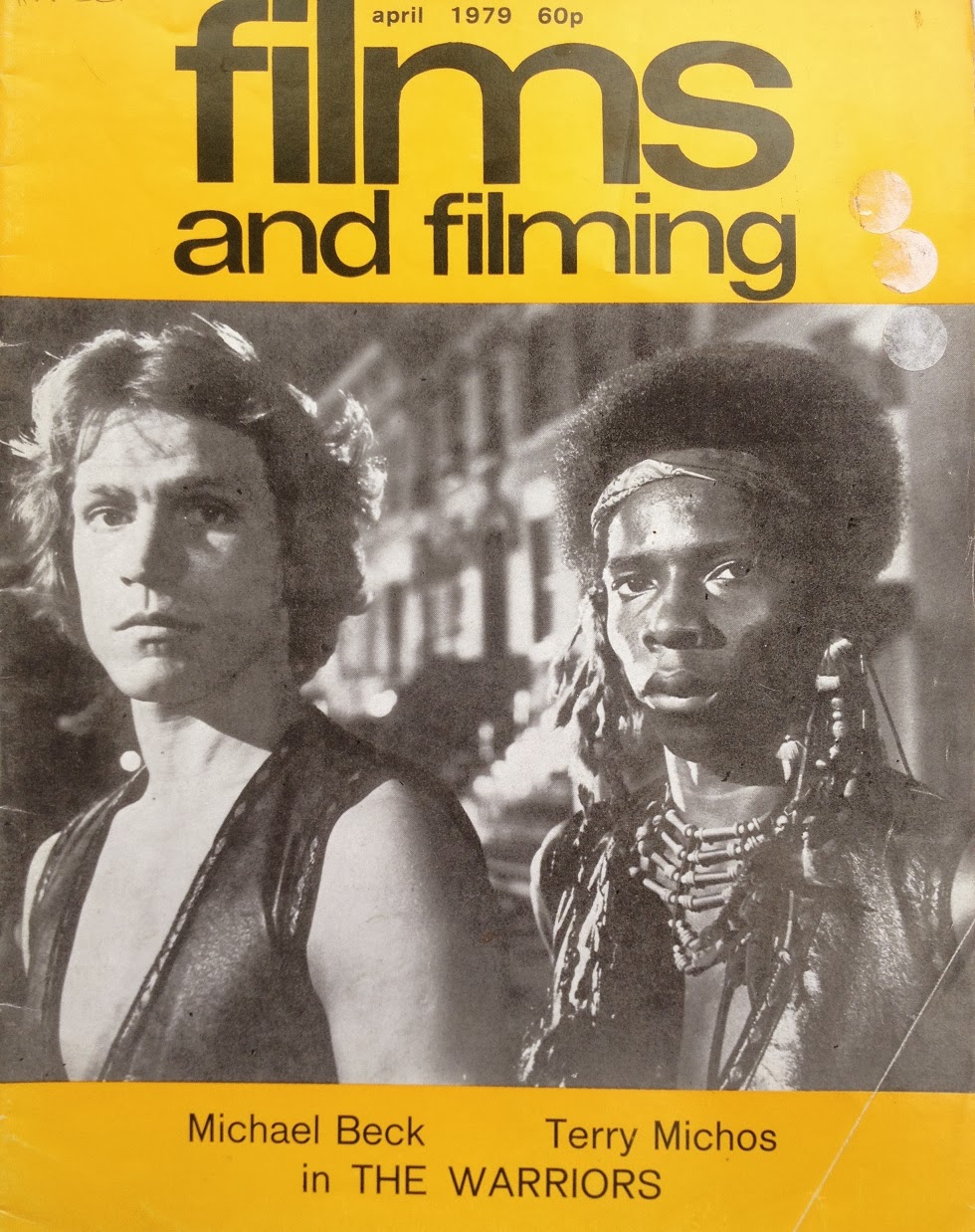 Walter Hill's The Warriors had far more obvious appeal to teenaged me, and remains a mythic treat. The epic story of a street gang trying to elude every other in order to get to their home turf like, er, Dorothy. As in The Wiz, New York City is a romanticised backdrop, looking almost friendly compared to the nightmares encountered on this major location shoot around Manhattan.


Gang violence was and is a huge problem and the tough image and promise of street fights made the Daily Mail do back flips as they continued to denounce 'screen violence'. Despite The Warriors only shedding one dribble of blood at the hands of the police. But actual gang fights in cinemas remained a problem in the US and the film had to be withdrawn there. 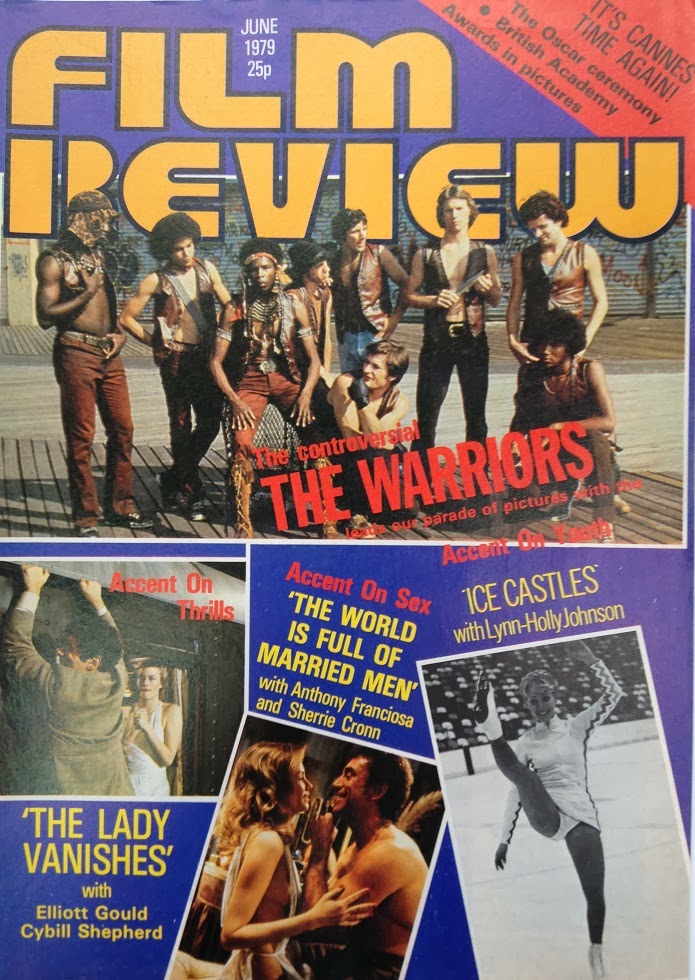 More about The Warriors here.


The Lady Vanishes, the last official Hammer film for over thirty years was a successful Hitchcock remake but a long way from their roots of years of horror.