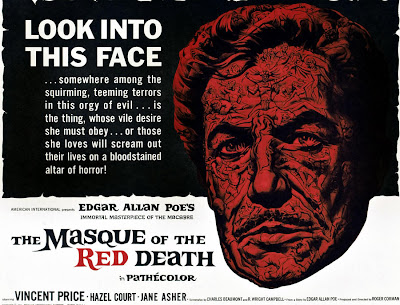 
The Masque of the Red Death is a costumed ball held in a castle fortress for the rich landowners, while all around the villagers are dying of a mysterious plague. With a captive audience, Prince Prospero (Vincent Price) can indulge in a wild party and even a little black magic without anyone complaining. Spurning his beautiful wife (Hazel Court), he kidnaps and attempts to lure a young christian (Jane Asher) to defect and worship Satan...


Roger Corman directed a series of the best ever adaptions of Edgar Allen Poe, while remaining true to his stringent budget guidelines. How he successfully managed to sell these movies to teenagers at the same time as the beach party films, I'm not sure. Poe's poems and short stories needed expert scriptwriters (such as Richard Matheson and Charles Beaumont) to remain true to the gothic sensibility while expanding the material to feature-length. The themes of plague, evil, class and religion make for a rich set of subtexts for a period horror film. 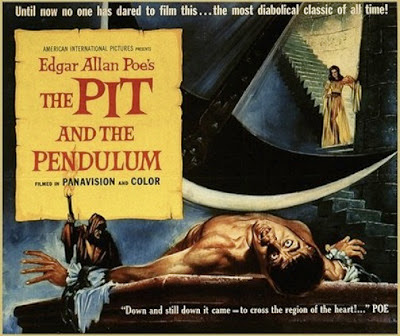 For the first time, Corman increased his budgets in order to get colour cinematography for these Poe films. The rich look was complemented by Daniel Haller's imaginative and psychological production design. The casts were usually headed by Vincent Price, grateful for material with some literary kudos.


For newcomers to these films, I wouldn't start with Corman's first Poe, The Fall of the House of Usher. The Poe films shot in America are characterised by endless creeping around cobwebbed corridors waiting for Vincent's dead wife to pop up. The Pit and the Pendulum is my favourite of these, for the magnificent finale and the dark presence of Barbara Steele. But Corman shot two Poe films in England, resulting in lusher and more ambitious productions. The Tomb of Ligeia even has exterior locations, at odds with the usual claustrophobic atmosphere of the series. The Masque of the Red Death is therefore my recommended starting point.


It has intertwined subplots, making for repeated payoffs, gets more than a little violent and subtly focusses on the battle between satanism and christianity. Prospero's repeated blasphemies are veiled in fancy words, but even the current home video version is missing gobbets of dialogue based on past censorship cuts. The oblique references to the outrageous sexual behaviour of his guests remain.

The production is entirely set-bound, but this is the best-looking Roger Corman Poe. The colour-coded sets, costumes and death scenes still look gorgeous, in no small part due to cinematographer and future director Nicolas Roeg (Don't Look Now, The Man Who Fell To Earth).

Vincent Price is once again matched by a strong female lead, the late Hazel Court  (The Curse of Frankenstein, who looks rudely ravishing, and relishing an evil role (rather than her usually cheerful romantic lead). She'd previously appeared opposite Ray Milland in Corman's gloomy adaption of The Premature Burial. and his Poe spoof, The Raven. 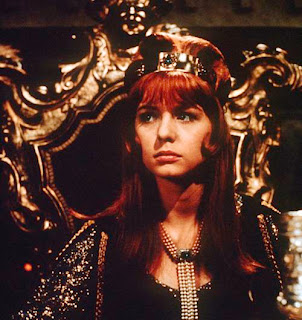 The rival of her affection is played by a young Jane Asher (here aged about 18) surrounded by professional thespians and having to do nude scenes. She'd later appear in Alfie (1966)and star in the recently restored Deep End (1970). She'd already been a child actress, unrecognisable as the little girl who meets the monster in The Quatermass Xperiment(1955).

The large cast is bolstered by many other British actors, best of all Patrick Magee (A Clockwork Orange, Tales From The Crypt) as the queasily curious Duke Alfredo. Skip Martin gets a meaty role as Hop-Toad the vengeful dwarf - who also appeared in a string of horror movies (Vampire Circus, Horror Hospital, Corridors of Blood). For added gravitas, there's Nigel Green(The Ipcress File, Jason and the Argonauts)in a too-small role.

For years I watched The Masque of the Red Death with the sexual and violent scenes cut out, with the 2,35 frame cropped savagely to fullframe 4:3. It's now on anamorphic widescreen DVDs in the UK and US, but it's been noticed that some older censor cuts are still in place. The film was last spotted uncut on TV in the 90s, with a couple of extra short scenes (the two little people discuss running away, and when Asher says she "slept badly"), extra blasphemy (Asher calls to God and Price assumes she's addressing him), as well as a glimpse of nudity (Asher being thrown in the bath). This BBC showing was of a print that started 'Anglo Amalgamated Presents' and had George Willoughby credited as producer, rather than Corman. To my eyes, the 'dream sequence' that Hazel Court endures was also a notably different colour, much more blue than the greener hues of the DVD transfers.


More details about the various versions here on the Classic Horror Film forum. 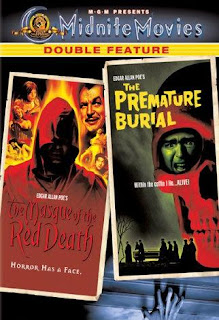 These cuts are annoying but negligible (Skip Martin's scenes with his love interest are unintentionally creepy as she's played by a little girl, her voice dubbed in by an adult (unconvincingly). The veiled, blasphemous dialogue remains mostly intact, as are the scenes of violence. Of the two DVDs, I'd recommend the US DVD (the MGM Midnite Movie double-bill) for having richer colours, which this movie definitely needs. The low-light scenes with mist and smoke still struggle desperately with the DVD compression and it screams for a Blu-ray release. The MGM UK 2005 DVD is also anamorphic but doesn't include the trailer. 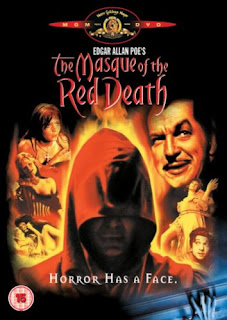