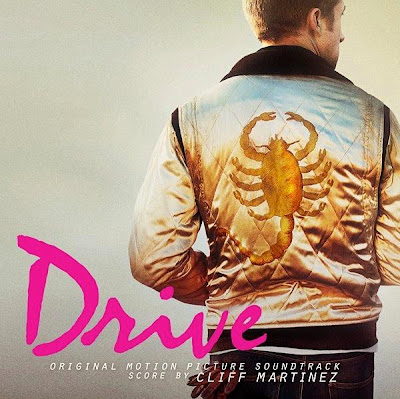 The Drive soundtrack is "80s-inspired", but which bands exactly?

From the opening track, Drive (2011) took me back to the synthesizer soundtracks of the early 1980s. Throughout the film, most of the music has an electronic element, using old synthesizer voices and early, simple rhythm machines. I couldn't wait to hear it again.

I've always been strongly drawn to electronic music. Electro-pop, rock, soundtracks - anything with synthesizers in - and especially the bands that went the whole way, using keyboards instead of guitars, drum machines instead of drums. Having collected this music since the 70s, with much of it from the 80s, I thought that identifying the possible influences on the Drive soundtrack might be easy...

Drive, the movie, is hugely impressive. The crystal-clear cinematography of nighttime L.A., the dark surprises, the precise characters, the extreme violence, all made it unforgettable. I'd deliberately delayed listening to the soundtrack until after I watched the movie, which certainly increased its impact. 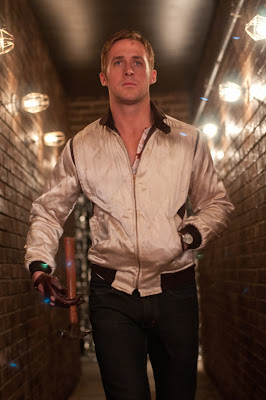 But listening to the album, it was initially hard to pinpoint any precise musical references. So I began rifling through my playlists of 80s electro pop, Eurodisco, post-punk, and movie soundtracks for anything that sounded similar. At the very least, you'll have some suggestions for further listening.

Googling interviews and reviews only yielded the phrase "80s-influenced" and the only trustworthy interview I've seen was director Nicolas Winding Refn's amusing lengthy chat on the UK Blu-ray. He vaguely mentions 80s Eurodisco as a musical influence, which wasn't quite what I was expecting and proved to be completely unhelpful (though I feel easier about suggesting the song by Berlin). 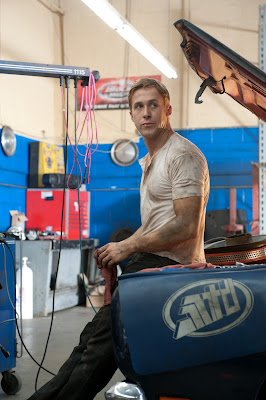 The album starts with several existing songs by various bands. Then, bridged by an instrumental from The Chromatics, settles into Cliff Martinez's original background score.

A couple of sound-alike songs I picked out could possibly be described as "eurodisco", but they're bleaker, slower, downbeat. Far more like early 80s post-punk, where the bands rejected drumkits and guitars for a totally electronic sound apart from voices. Interestingly, none of the guest tracks were written specifically for the film. The songs are all very recent tracks, with the exception of 'Oh My Love'. Luckily for Refn, there's been a resurgence in early-80s electro completely suited to his needs.

I've attempted to match the pace, synth sounds, or aural atmosphere of each track, or even just sections of them. Numbers in brackets (1'12) refer to moments that are minutes and seconds into a track. To illustrate, I've embedded YouTube clips purely for their musical content (please try and ignore the visuals). I avoided film clips or pop videos because we're only talking music here. In the interest of simplicity, I've not included any YouTube clips from Drive, because you already have the soundtrack, don't you? 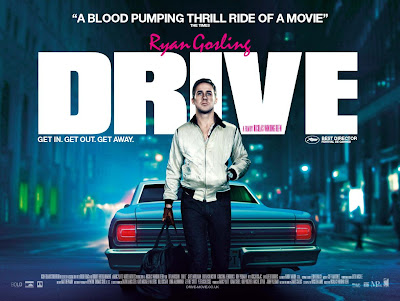 
This opening number hit me with a huge 80s stick, a decaying twangy synth sound, plodding drumbeat, a scarily processed male vocal with a downbeat counter-vocal, and a sweet female chorus. But this was the hardest track to match with an 80s counterpart.

Berlin's 'Take My Breath Away' (1986) has similar drums, electro sounds and sad female vocals, but I could not find an example of that main keyboard sound.

Kavinsky's scary vocals sound like a Vocoder, an electronic effect orignally used for novelty 'sweetening', for example Herbie Hancock's 'Tell Everybody' and 'You Bet Your Love' (both 1978) and of course the Electric Light Orchestra's 'Mr Blue Sky' (at 2'21) from 1977. But closer to Drive, I remembered the especially scary Vocoder voice (at 4'45 below) in Godley & Creme's 'Wind' off their 'Consequences' album, also from 1977. This track was used in a famously expensive Benson and Hedges advert, where a mysterious helicopter glides over the desert to drop it's cargo into a swimming pool.


Yes, this all sounds very 80s, but more specifically the first few years of the decade when post-punk and gothic bands were trying out newly-affordable synthesizers and similar gadgets. The first Cocteau Twins album 'Garlands' (1982) used drum-machines and guitar loops to similar effect as this Drive track, with Elizabeth Frazer's vocals soaring sadly over it all. I picked 'Shallow Then Halo' from the album 'Garlands' for the similar tempo and structure.


A sweet and impassioned voice floating over a stomping bassy synth. But dare I say the lyrics are too obvious at underlining the action.

The intro with the lone keyboard is a closely matched by 'Summer Spies' (1985), a single by Fatal Charm, which also has a heart-rending female vocal. Incidentally, they were the first band I ever saw live, as a support act for Orchestral Manoeuvres in the Dark.


This is the Joan Baez song in the pack (I'm thinking of the end of Silent Running) with simplistic lyrics about the beauty of nature. The track also jars against the rest of the album by being devoid of synths. But the lush orchestration is growing on me, providing a similarly beautiful everything-stands-still moment as 'Llorando', sung by Rebekah Del Rio in David Lynch's Mulholland Drive. If only 'Oh My Love' had been sung in Spanish, the lyrics wouldn't have been so distracting...

'Oh My Love' was originally used in a controversial film... find out more here in this great Drive article on A Fistful of Soundtracks.

The album goes completely instrumental at this point, but before Cliff Martinez' original score takes over, there's this great mechanical track from The Chromatics. It sounds like a very early rhythm machine with a sparse drum machine pared down to a light metal chink.

If the track had been built up into a song, it might have sounded like John Foxx's 'Burning Car' (1980). Foxx was the original lead singer for Ultravox before Midge Ure took over. He had several hits at this time when his synth sound was ahead of the game.

Also from the early 80s is this more laidback track from Pink Industry - suitably sparse, but with a female vocal befitting the Drive vibe. The emphasis is again on a simple drum machine. 'Pain of Pride' is listed as hitting vinyl in 1985, but had been recorded years earlier in BBC sessions for John Peel's radio shows, maybe as early as 1982. 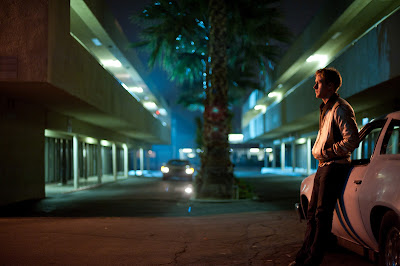 The core of Cliff Martinez's score, which makes up the rest of the album, is actually very modern. Roughly half of it is ambient - daunting atmospheric sound that refuses to betray what instrumentation is being used, often devoid of drumbeats. Some tracks are like single notes stretched and held until they transform into the next, reminiscent of the ethereal music made by rubbing wineglass rims. The overall vibe is similar to the albums of Jon Hopkins, who provided a gorgeous, melancholy soundtrack to Monsters (2010).

Several tracks give way midway to synthesizers that recall the sound of specific 80s soundtracks. Drive's thematic parallels with Michael Mann's Thief (UK title Violent Streets, 1981) leads us logically to the work of Tangerine Dream, among others from the early to mid 80s.

'Rubber Head'
(all the remaining tracks are by Cliff Martinez, 2011)

This begins with ambience and then, after a minute, brings in a rolling electronic rhythm. 'Love On A Real Train' by Tangerine Dream from the Risky Business (1983) soundtrack roughly matches the rhythm, but 'No Future' from the same album would be more apt for the dark tone of Drive. If memory serves, this is playing over the scene where Tom Cruise, um, pleasures himself...

Completely ambient tracks with mournful chords that occasionally offer hope, and a subtly celestial backing. I'd offer 'Olancha Farewell' from Harold Budd's album 'Lovely Thunder' (1986) in comparison. Harold Budd was a collaborator with the Cocteau Twins and continued to work with Robin Guthrie from the band, most notably on the beautiful soundtrack to Greg Araki's Mysterious Skin (2005).


'They Broke His Pelvis'

Similar to 'Rubber Head', but with a slightly lighter mood. 'Love On A Real Train' by Tangerine Dream, also from Risky Business (1983), has a similar rhythm. But Klaus Schulze's 'Lecter's Cell' from Michael Mann's Manhunter (1986) is similar in tone. 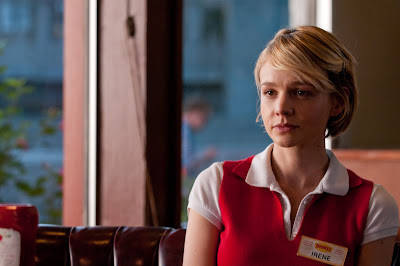 
Starts with ambience but builds into the defining 'driving' music of Drive, with the bubbling rhythm that kicks in (at 2'30) and what sounds like passing trains. The rolling synth seems to echo the guitar from 'Where the Streets Have No Name'. But the kings of dark 'driving in L.A.' music are again Tangerine Dream. Try 'Diamond Diary' from their soundtrack to Thief (especially at 2'15).

'See You in Four'


An electro foghorn opening and then spooky jangling keys. At (3'08) a rolling synth in a dark mood, a little like Tangerine Dream's 'Betrayal' from their soundtrack to William Friedkin's Sorcerer (UK title Wages of Fear, 1977).


This ramps up with a gentle snare drum at (1'21) and then a wonderful bubbling rhythm at (1'39). There's a scary blasting (at 2'24) which again sounds like the punctuations in Tangerine Dream's 'Diamond Diary', from Thief (1981) at (2'50). 'Diamond Diary' is already embedded further up the page. 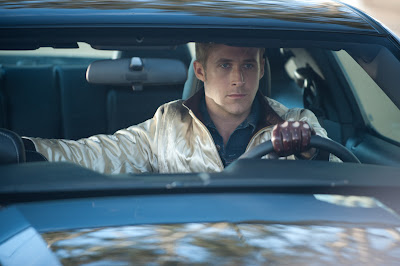 A murky, industrial sound, with bassy bursts at (1'12, 1'44) reminiscent of the skull-crushing scene in Blade Runner... 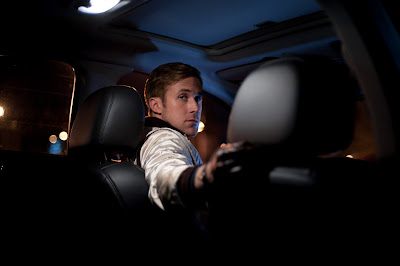 Ethereal, cold downbeat tones and an echoing rushing sound. 'On the Beach' has an unnerving metallic tone that gives way to a very downbeat murk, eventually relieved by more hopeful chords at (5'03). Here I'll offer another track off the 1986 'Lovely Thunder' album, Harold Budd's 'Ice Floes In Eden'.

The last track on the album starts off like 'Wrong Floor', with those 'wine glasses' vibes, then (at 0'47) guitars come in and build until (at 1'30) the electro rhythm kicks in brilliantly. A close electro-match would be the intro to Freddie Mercury's 'Love Kills', which he recorded with Giorgio Moroder for the soundtrack to Metropolis (1984), an early restoration of Fritz Lang's 1927 sci-fi epic. 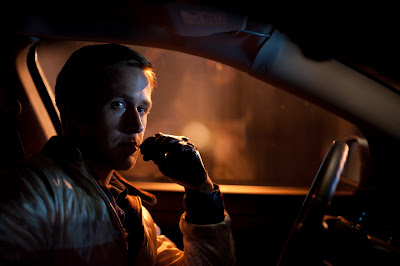 Before I started listening to the Drive soundtrack more intently, this 1985 instrumental track from the Cocteau Twins was an early contender. It has always suggested to me moving through a darkened L.A. sometime in the near future. It might work with the cityscapes of Blade Runner, but it could easily complement the nighttime scenes in Drive. So finally, why don't you also try 'Ribbed and Veined'...