At the moment, I'm not watching nearly as many new films as old. I guess the point of collecting movies is to watch some of them occasionally. But the mention of an army of zombie soldiers and giant samurai warriors caught my interest. Then I heard that this isn't a fantasy action film so much as a fantasy drama which lapses into fantasies of action... Even more interesting. Directed by Zack Snyder whose movies I've all enjoyed - 300, Watchmen and the Dawn of the Dead remake. That's enough to warrant a watch.

Like 300, it's real actors set in a largely CGI world, which I currently associate favourably with graphic novel adaptions (though this is an original story from the director). CGI worlds suit fantasy very well, though sensibly, sets are used for the indoor scenes. An early example of this approach, Sky Captain and the World of Tomorrow (2004) made things far too complex for itself by building everything in the computer, using very few sets or props.

A fatal accident sends a teenage girl into a corrupt private asylum where the inmates have to 'dance' for paying visitors. But when BabyDoll dances she daydreams of escape, her fantasies inspiring her and her new friends to attempt to escape captivity...

I kept seeing elements of Terry Gilliam's Brazil, like the fight with the giant Japanese armoured warrior, an identical opponent to one of Sam Lowry's heroic fantasies who also used a heavy-duty spear. The theme of searching for an escape from guilt also struck me as a similarity. One early scene also reminded me of the ballet school from Suspiria - something about the colours used in the set.

The real life interludes slotted between the elaborate and varied action scenes were just as entertaining, owing to the stylised look and strong performances from Carla Gugino and Oscar Isaac (intense enough to make a great Scarface). Good to see Scott Glenn onscreen again (Backdraft, The Right Stuff, and last week's review The Keep).

Key scenes are backed with some extraordinarily reworked cover versions of the Eurythmics, Björk, Jefferson Airplane and other offbeat tracks that immediately impress. 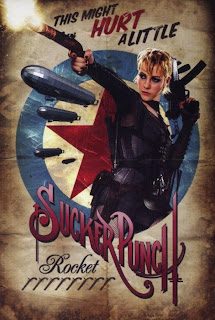 While Zack Snyder's 300 presented men as sexy heroic fantasy, Sucker Punch does the same for women, with a female-heavy cast that appeals to both sexes in a different way to the more obvious 'chick flick' comedies. Admittedly, the incendiary use of the name BabyDoll for the lead character (Emily Browning) keys the audience into its brand of humour. But I was surprised that the film was only rated 12 (on UK home video) considering the amount of sexual content in the story (alluded to, ever present, but never explicit). Japanese anime/movies/TV have their young female characters sexualised, often with shorter skirts, less confidence or self-determination. Yet they largely escape the criticism that Sucker Punch has drawn.

I've also been disappointed by far more exploitational 'schoolgirl action hero' Japanese movies, especially recent direct-to-video offerings made on low budgets that are on offer at the same price. This offers similar action but on a huge scale, set to maximum thrillpower. If Sucker Punch had been Japanese, it would have been the success it deserves. 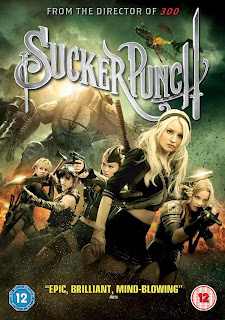 Available everywhere on DVD and Blu-ray, with an option to watch the longer director's cut, though I was perfectly satisfied with the theatrical version.