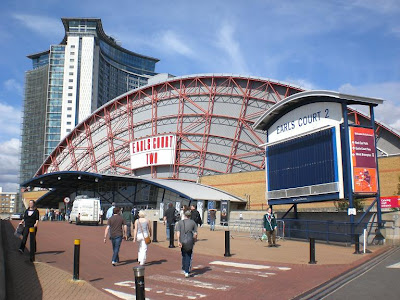 Just because I want to meet William Shatner, that doesn't make me a Trekkie!
While it presumably pales into insignificance against the San Diego Comic Con, this London version is only a train ride away for me and... William Shatner was attending.

I guess it's pointless trying to distance myself from Star Trek. But I wasn't wanting to see him because of Star Trek. Every time I say I like horror movies and sci-fi, most people's brains fast-forward immediately to labelling me as a Trekkie. Should I speak more slowly? How do they get from horror movies to Star Trek? Admittedly I first saw him in classic Trek, but I'll watch him in anything: from TV movies to every episode of TJ Hooker, his episode of The Outer Limits, the esperanto movie, anything. His acting style is mesmerising, bizarre, unique, fascinating. I had to meet him!

He was by far the biggest draw at the event - I was delighted that he has so many fans in England. We'd pre-booked tickets to get our photos taken with him, months in advance, and we still had to wait all day to see him. 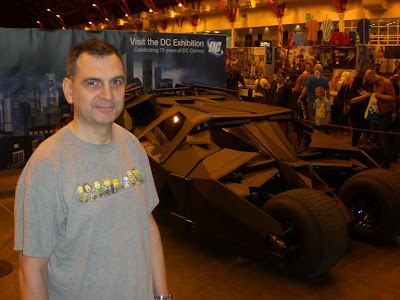 I'd love a Batmobile, but which version is the best?
In the meantime, there was other fun to be had. Besides the Batmobile (from Batman Begins?) there were some great fan costumes around. My favourite was the classic Cylon with an operational 'scanning' red eye. The lords of the sith were a little overweight, the Imperial Stormtroopers a little short to be stormtroopers, but the Alien xenomorph was good enough to illicit heartfelt screams from the unwary. 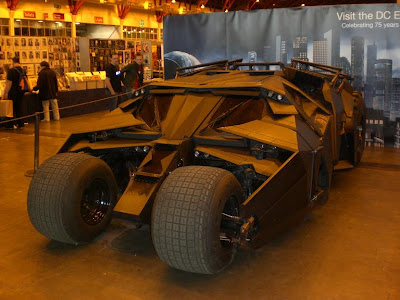 I wanted to meet Andrew Robinson - his roles as the really insane killer in the first Dirty Harry film and the nasty dad in the first Hellraiser had provided me with indelible memories. Despite being buried in rubber appliances, his character Garak, in Deep Space Nine, is an impressive and subtle performance, lighting up every scene he's in. I asked him about how he got cast in his first film, Dirty Harry. He said it was because he was friends with the director's son, who he'd already worked with. I thought it was still a stretch that a newcomer to movies could pull off a character as completely demented as Scorpio. Comforting though that the actor is nothing like his screen villains. I also got a little nervous meeting Tony Todd, who's even taller than me. Again, really nice and normal in real life. Would you really want to meet someone like the actual Candyman. I moved on to meet Tom Noonan, mainly because he was the Tooth Fairy serial killer in Michael Mann's Manhunter, the film that introduced Hannibal Lecter to the big screen. That, and he was the Frankenstein creature in The Monster Squad, one of my favourite movies. Most recently he was in the acclaimed faux 80's horror House of the Devil. I brought up the subject of the possible Monster Squad remake and hit a nerve. Noonan lamented that no less than four movies that he'd been in were currently in the process of remakes. 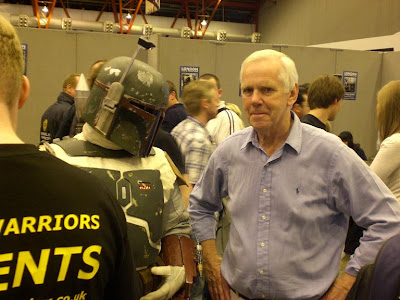 Onto the Star Wars corner, where there was a spread of Star Wars talent - Dave Prowse and Kenny Baker as usual, Jeremy Bulloch (the first Boba Fett, pictured above), and one I hadn't seen before, Julian Glover. Not only had Glover been in The Avengers, early Doctor Who, Space 1999, Bond film For Your Eyes Only, but was also an Imperial Officer in Star Wars and The Empire Strikes Back. But I wanted to meet him because he'd been in Hammer's Quatermass and the Pit (1967) as the untrustworthy Colonel Breen, one of the few remaining survivors of that cast. 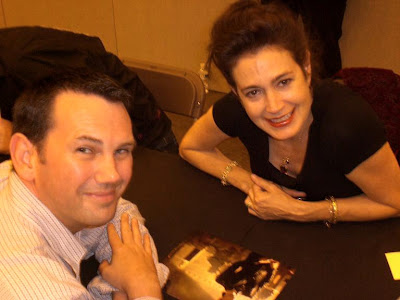 As a break from collecting the autographs of bad guys, we went to meet Sean Young, the star of Blade Runner and Dune, not to mention Ace Ventura - Pet Detective. No, I didn't mention it. While I believe she's fantastic in comedy, it's her character in Blade Runner that I'll always associate her with. While it's my favourite film, this is only the second actor I've met from the cast - the first being Joe Turkel (he played Eldon Tyrell). Again, despite what I'd heard through the years, she was really nice and charming, though I was too starstruck to ask any meaningful questions or pay any original compliments. (The above photo is Sean with my husband.) I'm usually too shy to ask to get photos with my idols. I settle for their autographs.

But finally it was time to meet Shatner.

It was certainly well-organised. Like a military operation. Over the weekend, thousands of fans wanted to get his autograph, get his photograph or attend his Q&A session. The only way this was going to work was on an assembly line. I wasn't under any delusion that I was going to get quality time with him. I recalled my 'meeting' Adam West (my favourite Batman) - there was only time to say "Hello, Mr West" while he signed an autograph. At least he looked up to see who was talking to him.

Much the same thing happened with Shatner, though more surreal. As we queued to get an official photograph taken with him, we noticed how fast the line was moving - an early clue as to how long we were each going to get! As we took a corner around a partition, there was William Shatner, parked on a backless bar stool, grinning at the camera. All we had to do was step up to a line, wait for the signal, step onto the cross, smile, (flash), and move on.

The photographer was calling the shots. Well, shouting the shots, like a drill sergeant. Next! It was my turn. I had to say something to him. I used 'the Adam West manouevre'. I said "Hello, Mr Shatner!". He looked up at me, still grinning - I guess if he dropped the happy expression he'd spoil a shot and his day would get even longer. As our eyes met, and I saw his happy little face, it crossed my mind that he was thinking of how much he was making each time the flash went off.

By talking to him I'd interrupted the flow of the operation. The photographer made me hold for a second photo because we hadn't stuck to the script. I squatted down a little, so as not to tower over the happy gnome. Flash! I was done. Next!

And it was over. I'd met William Shatner. It was just the briefest of moments, but it was all worth it. To a fan of all his works, it was like an audience with the Pope, and I should know... 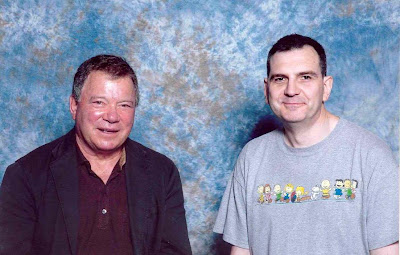 Anyone interested in over 50 years of the work of Mr Shatner should sample this unimpeachable blog,
Shatner's Toupee, which reviews his many performances while taking care to also analyse the quality of 'hair acting'...

And finally, (thanks to Megan for the heads up) there's this new dance track that celebrates Mr Shatner selling himself as both an actor and a director...