Farewell, Frank Sidebottom - the death of a clown 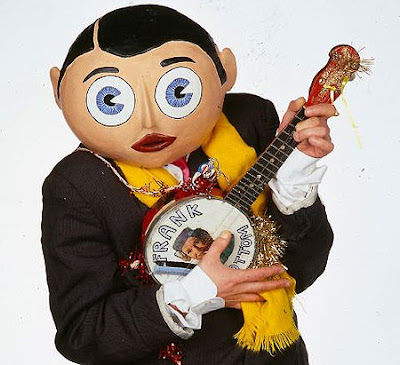 Monday evening, I was shocked and saddened by the sudden death of Chris Sievey, a man whose face I'd never seen.

To the world he was mainly known as an alter-ego, his true identity as successfully shielded as Batman, for many years. Frank Sidebottom was his comedy creation, first on radio, then stage then TV. The characters he created for Manchester's Piccadilly Radio were as inventive and funny as those Kenny Everett created for London's Capital Radio. But Frank was even more anarchic, never pretending that his sidekick, the demented Little Frank, was anything more than a puppet made of cardboard.

Their adventures in space, football, pop music (Little Frank released records as well) and Sherwood Forest were little more than sound effects and library music, with Chris and a few friends ("Lard!") doing the voices, but they were as evocative as any radio play, and side-splittingly funny.

Having fronted bands before, notably The Freshies ('I Can't Get Bouncing Babies by The Teardrop Explodes'), it was easy for Chris to take Frank on stage to sing his songs, play his banjo or cheap synthesizer, and argue with Little Frank. The best joke was that Sidebottom's skills at ventriloquism were completely hidden by his mask. The huge proportion of Frank's head was due to the character originally being a schoolboy, broadcasting Timperley Radio from his mum's garden shed.

Frank's crap puppetry was all part of the fun. But if he invented a new character, the audience expected to see them up on stage too. Even Breville Toaster Puppet could make a grand entrance, riding in an Action Man jeep.

Frank's escalating popularity seemed to peak when he hit National Children's TV, like as a regular part of Saturday Morning's TX, presented by Tony Slattery. I thought this was the start of the big time for Frank, but no. 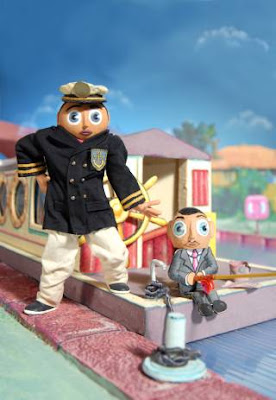 He continued touring, (supporting John Cooper Clarke earlier this year) but his music is only represented as a couple of belated compilation CDs, of his best songs and unforgettable medleys (A Tribute to Queen). Apparently, he had fans in the US and I'm pleased to hear his appeal travelled so far. Now that he's gone, I expect to fill in the gaps of just what he got upto through the years.

My fondest memory isn't of seeing Frank in concert, but when he recreating the madness of his radio sketches in one of his Christmas Pantomimes at a packed Timperley Labour Club. Effortlessly funny, he could create a whole evening's entertainment out of cardboard. If anything went wrong, he could improvise his way out, or simply blame Little Frank.

I was hoping one day to see an interview with the man behind the mask, and see Chris actually doing 'that voice', finally linking up the man to the character. But perhaps it's better this way.

Sadder news came later in the week, in that Chris was flat broke at the end. But his many fans are making sure he'll get a fitting send-off. Here's a fuller career obituary from The Independent. A picture gallery from The Guardian. Frank's blog is brimfull of all his recent works and remains online.

One of my favourite records was this medley of Frank's favourite sci-fi shows, bashed together into a medley.

There's still plenty of Frank Sidebottom on YouTube - clips of his TV shows, pop videos, live performances and even an animated visualisation of Frank's world, entirely made of cardboard.

Chris, Frank, I thank you.