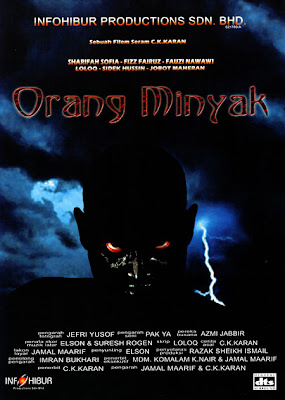 ORANG MINYAK
(2007, Malaysia, The Oily Man)
I couldn't visit a new country without sampling the local horror films. While browsing DVDs, I remembered this title one from a poster on 24framespersecond, back when it was first in cinemas. There's definitely better Malayan movies out there and low-budget horror films give a remarkably skewed view of a country's film industry. But while Orang Minyak (2007) is pretty bad, it led me to a previous version of the legend Sumpah Orang Minyak (1957) which was far more impressive, and I review it further down...

Watching Orang Minyak, the complexities of the plot, if there are any, were hamperered by the lack of English subtitles. Like Thailand, the available languages on DVDs vary from film to film. But here goes...

In a small village in the rainforest, young women are being attacked in their homes at night. A bald, naked man, apparently covered in black grease, hypnotises his victims with red glowing eyes, rapes them and leaves them comatose. The villagers know that the Oily Man of ancient legend is back. But two of them are confused because they'd already vanquished the evil spirit by imprisoning it in a small bottle and throwing it in a lake. Meanwhile the Oily Man is loose, and has sealed a deal with the devil - he's going to need 21 victims in all... 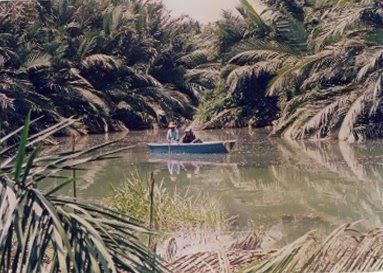 While I've little idea about local beliefs and customs in rural Malaysia, I do know when a camera is out of focus, which it repeatedly is in many shots. Added to this the special effects, brightly coloured animated overlays, which give the film the surreal look of a Chinese ghost story from the 1980's. Together with a flurry of film scratches that belong to 1970's prints, this movie looks decades older than it actually is.

The demon, with red glowing eyes, looks most effective in close up. But in longshots he's unconvincing, wearing what look like skindiver's rubber trousers pulled up to his chest. His superhuman leaping around is achieved with rather slow wirework. The atmosphere is helped by the deep blue light that bathes the night scenes, but the Oily Man is often far too well lit to look anything other than a non-oily man. 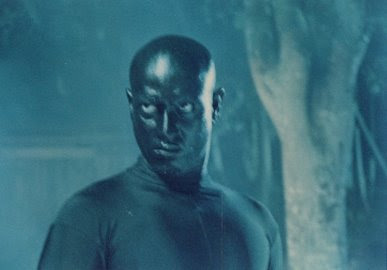 The story stalls as the attacks continue without progressing the plot. The young hero tries to defeat the Oily Man with martial arts and cheap animation, where the local priests' ceremonies and endless angry villager meetings have failed.

The broad acting from the supporting cast, and lush jungle locations reminded me of Thai horror films of ten years ago. While this film is sold as horror, and despite the theme of sexual violence, the film is actually non-explicit and I'm presuming it was made for a general audience, particularly with it's many slightly comical characters.

The trailer is here on YouTube, but you have been warned. If you want a horror film, this isn't one. The Malaysian DVD, from Golden Satellite, has no other languages on it, 5.1 stereo, and is letterboxed but not anamorphic. The cover art is the same as the poster. (Movie stills and poster courtesy of Sinema Malaysia). 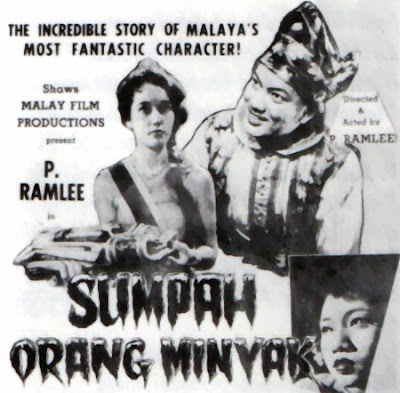 SUMPAH ORANG MINYAK
(1957, Malaysia, Curse of the Oily Man)
Looking around online for more information about Orang Minyak (which hasn't even got an IMDB entry), I learned of the earlier filmed version of the legend, Sumpah Orang Minyak (1957), which I thought I'd little chance of seeing, until discovering it was also on YouTube in it's entirety (linked below)! It's a very different story, grander in scale, in budget, and in the end more effectively scary than the modern version. Again, it has no subtitles.

Starting off as a drama, in the vein of The Hunchback of Notre Dame, a facially disfigured man (possibly referenced in the new version by a priest with a hugely swollen jawbone) is taken in by an unlucky batik printer. But the dirty-faced outcast is also an excellent artist and helps turn the printer's business around.

When the hunchbacked outcast gets viciously bullied by local fishermen, the women of the village take pity and he begins to fall in love with one of them. While believing she couldn't ever love him back, he appeals to the gods and is miraculously restored to full health and a handsome appearance. But when he approaches his intended love, the villagers realise who he really is and get ugly. They attack him, and by killing one of them, he angers the gods. Outcast once again, he makes a deal with the devil, and is transformed into the Oily Man, and takes revenge with a rampage of violence.

This black and white film gets a handsome budget and big sets, managed by Run Run Shaw, the producer who went on to make it big in Hong Kong by making dozens of internationally successful kung fu films. Some of the special effects rely on simple editing, and appear a little bit Monkey, but there are elaborate camera effects too. The cinematography and acting are far superior to the modern version - but it's a fantasy drama that only really enters the darker supernatural world towards the climax.

While it's again aimed at a family audience, this version is slightly more explicit, more bloody and even gets unsettling, when we hear the nerve-jangling screams of his victims. A grisly touch is the oily 'X' he draws on their faces.

Altogether it's very watchable, and one of the best 1950's Asian films (from outside of Japan) that I've seen. 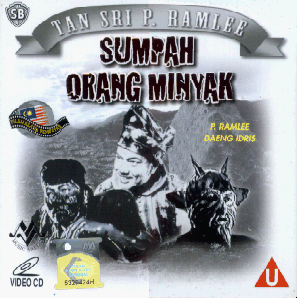 The film is available on VideoCD, as an example of a Malaysian classic movie, and also for the lead actor P. Ramlee, a much-loved actor and singer of the time. He plays the multiple central roles, sings a couple of songs, in the heaven sequences and directed as well.

The entire film is on YouTube, part 1 is embedded below, but the Oily Man doesn't appear in the story until part 8...