The best news in this batch of region 2 DVD news, is that the weird, wonderful, unique, Czech children's nightmare, that is Valerie and her Week of Wonders, has finally been restored and released. Previous video releases were from a print that literally looked like it had been dragged over a cheese grater. This 1970 film is released in the UK by Second Run video. Full review here. The Animals Film (1981) will be released in the UK on September 29th by BFI Video. This tough documentary took an unflinching look at the meat industry, and helped me to decide to become a vegetarian nearly 25 years ago. The awesome adult anime fairy tale Jin-Roh finally gets a DVD release in the west, from Optimum DVD. In an alternate future, where Japan is wracked with civil disobedience, heavily-armed police are used to quell street rioting. When an officer is involved in a fatal incident with a young protestor, he starts to question his allegiance. I can't wait to see this again. It's one of the most dramatic animated feature films, though the tone couldn't be less like a 'cartoon'.

Vexille, another mecha-thriller from the makers of the 3D CGI Appleseed feature films, comes out in the UK on September 1st from Momentum Pictures. And now for a few more DVD releases, all PAL region 2, from around Europe. The bonkers circus serial killer Berserk (1967) has debuted on DVD in Spain, reportedly with English audio. Joan Crawford and Michael Gough (also both in Trog), Ty Hardin and Judy Geeson star. This was last released on US VHS but has not been on DVD before. In Germany, the 1975 Doc Savage - The Man of Bronze (movie reviewed here) gets a DVD release where the UK and USA never have. It's listed as having English audio, which is not necessarily a given on German releases. If confirmed, this sort of removes it from 'Not On DVD' status, but I'd like a widescreen remaster ideally (it's been listed as fullscreen) and to be available closer to home. 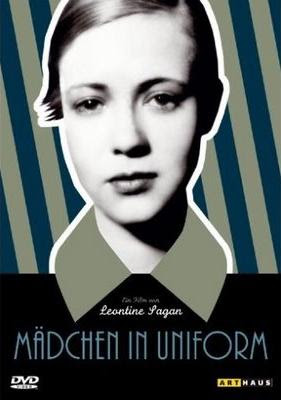 Two more rare releases will have to stay on the Not On DVD list because they probably have no English on them. Madchen In Uniform (1931, reviewed here) finally debuts on DVD, but only for German-speakers. Hopefully it's been restored, making it easier for another European distributor to pick it up for a subtitled edition, please, somebody? Also in Germany on DVD is Who? (1973), also known as Robo Man on US VHS, which is on my wanted list. This is an American movie, based on a novel by Algis Budrys who passed away recently, telling the story of a scientist whose identity has been erased in a lab explosion, his head now covered by a metallic mask. American authorities have to determine if he is their man, or a trained Russian imposter. It starred Elliott Gould and Trevor Howard, and has apparently been released full-frame, without any English audio or subtitles, as Der Mann Aus Metall. So close, and yet no good. I reviewed an old VHS of the film here.
Posted by Mark Hodgson at 10:17 am