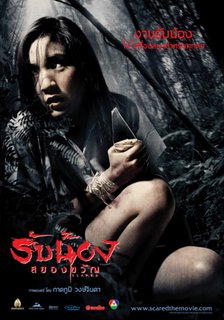 A busload of impossibly pretty schoolkids on a school trip deep in a Thai rainforest. Stranded by an accident, the survivors are picked off one by one in increasingly gruesome ways. But who is murdering them and why? There are so many teenagers on the bus, that there is never really a chance to work out the relationships between any of the kids or even enough who the characters are. Just when you think you are getting to know them a little, they’re dead! After some feeble initial 'shocks', the death scenes get more unexpected - the variable special effects are rather gory and occasionally digitally aided. Just like Friday the 13th, the death scenes are the most entertaining thing in this film - the same murder weapon is never used twice, there's a lot of kids on the bus, and there's some neat new agricultural implements we haven't seen before...

But there’s very little plot and the music (usually the backbone of atmosphere and suspense) is thin, inconsistent and uninvolving. I was disappointed to notice a boom microphone ducking into the image a couple of times in an early scene - haven't seen that sort of error for a while - Shutter this isn't. Not is it Scream. The staging of much of the action makes the characters seem stupid, as they ignore many of the basic Scream rules of horror films. If only they’d all calmed down and stuck together…

But I don't want to be too hard on Scared. As the film opens, you get a unique look at some of the end of year Thai school festivities and there's a beautifully staged scene in the school hall, which promises a film of Thai traditions. But instead it soon descends into a rip of western slasher films – no logic, lots of blood and screaming and a rather high body count. The main disappointment is that the film doesn’t look nearly as moody as the fantastic posters, nor do any of the events in the posters accurately appear in the film.

It's entertaining though. The photography is nicely done, on what looks like high definition video cameras almost looking as good as film. The locations are unusual, particularly the early rainforest scenes, making it vaguely reminiscent of Cannibal Holocaust, especially with loads of stakes sticking out of the ground.

This is certainly a spirited effort that may please gorehounds and collectors of horror cliches, but not fans of originality and clever plotting. The Thai DVD has no English subtitles, but once the film gets going, there's not a lot of dialogue anyway. In the extras, there's a trailer, TV spots, a brief behind-the-scenes segment, some wallpapers and a commentary in Thai. The image is 16:9 anamorphic, the audio is a clear 5.1 mix, and even legitimate Thailand DVDs are very reasonably priced.